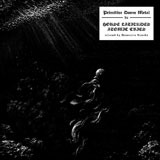 The record begins with a slow lurching out of the shadows, with plucked bass strings and sustained synth, that kicks into gear after about two minutes and thirty seconds. Horse Latitudes‘ ‘Drowned Current’, a 12 minute grind through the lower chambers of drone, is the first of three tracks on this split with Atomic Cries. It continues along the decreasingly melodic path set out in Black Soil, harnessing ultra slow bass-only doom metal into a texture from which drummer Harri can yearn about what I assume is the end of the world.

Where the Finnish band’s early material held more clearly derived from doom metal, emphasised by a crunchier bass sound with notable melodies, this new track is slower and more monotonous. It has gone full drone. Or perhaps funeral doom. Whilst less melodic, the bands two bassists (and zero guitarists) still offer recognisable riffs that churn forth at the speed of granite, propelled by sparse crash and kick-heavy drumming.

This semblance of melody pushes Horse Latitudes away from the drone of bands like Sunn O))) and closer toward the funeral doom of bands like Thergothon. With crunchiness gone, focus has seemingly been placed on teasing out the most archetypal low end sound from the basses. It is here that Horse Latitudes most shines: the production of ‘Drowned Current’ is crystal clear, with both Heidi and Vellu’s basses almost heavy enough to create their own gravitational field, and drums given a wide enough space to feel huge. Every riff is felt in the gut. Every beat comes down like a hammer.

Horse Latitudes are not a band revolutionising the drone/doom/sludge genre but they are good at what they do. If you enjoyed ‘Black Soil’ you will enjoy this; if you haven’t heard the band before then this serves as good an entry point as any. ‘Drowned Current’ goes out with a swirl of ambience.

Atomic Cries has two songs on offer here, both around five and a half minutes, and thus matching Horse Latitudes‘ side in length. Musically they are very different though, or at least as different as you can be within such an extreme niche of music.

From the first notes of ‘Final Call’ you can hear a more dynamic sound in Atomic Cries. You can also hear a more traditional guitar/bass/drums combination that makes the band sound almost upbeat in comparison to their Finnish counterparts. The guitars, clearly in the vein of blues-based doom and Sabbath lineage, scrawl all over the tracks with riffs and the occasional reverb-drenched freak out. The bass holds its own as both a foundation for the guitar but also an instrument in its own right,

This is even more obvious in second track ‘Portrait Of A Man’, which captures an almost folk Western feel with its perpetually buzzing ambience, picked clean guitar and infrequent use of tube-distorted mourning guitar. It is vaguely reminiscent of Neil Young’s ‘Dead Man’ soundtrack, or perhaps similar to primitivising Earth’s ‘Hex’ album. There are no drums on this song.

There are drums on ‘Final Call’ and they are satisfyingly tribal in sound, providing the band with a very basic but hypnotic sound. The vocals are sung but obscured with echo and lethargy to the point of being incomprehensible, fitting the overall aesthetic of a band steeped in doom.

I haven’t heard Atomic Cries‘ previous releases yet but with these two tracks they have very clearly marked out a unique corner of the drone/doom cavern system for themselves.

This type of music is not for everyone, of course, and it is unlikely that this is the record to convert new fans, but if you already enjoy either band of the genre then the 20 minutes on this split are an interesting crawl through two idiomatic sounds. 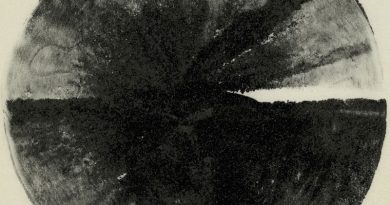