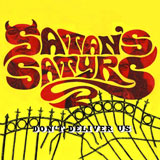 Much like a horde of feral, strung out henchmen smash-crashing modern suburbia, the youthful Satan’s Satyrs raped and pillaged our ears with the Wild Beyond Belief (2013) and Die Screaming (2014) full lengths; they made it clear that age is irrelevant in the context of throat ripping rock and roll – a lot of bands wear a lot of different hats and inevitably fail in their search for (mismatched) identity; they either follow their influences like gospel, or inject too much contradiction. Satan’s Satyrs – Clayton Burgess (bass/vox), Jarrett Nettnin (guitars), and Stephen Fairchild (drums) – however, distill the perfect punk-doom speedball cocktail, train track arms and all. The trio must have come out of the womb with Black Flag’s My War LP ringing in the background; that album’s dual identity of unhinged mania and nihilistic doom could stand as the blueprint for Satan’s Satyrs’ early success.

But the vibe of Don’t Deliver Us, much like its two predecessors is heavier on the mischief – like a teen who (non-fatally) stabs you because it’s funny, versus the paranoid schizoid who actually wants you dead. But their sense of humor is not necessarily a bad thing, and it makes tracks like Two Hands a shitload of fun even if its 3 minutes gut you like a runaway jackhammer. Burgess’s loose noodling anchors Nettnin’s axe wielding circus act – tone like a warped stun gun in the red, Fairchild’s drumming like a rogue side car with its wheels about to come off, they burn through instrumentals (Spooky Nuisance) and mid-track jam sessions (check the erupting boom and swell shred on Creepy Teens) with such instinctual ease you’d think that some grander demonic puppeteer was running the show.

But there’s a reason these guys share the stage with heavy hitters like Electric Wizard (Burgess plays bass in both bands) – they have the talent and they have the ability – plus enough manic creativity to keep (at least for now) consistent output coming. It’ll be interesting to see if Satan’s Satyrs remain content to taunt us with rabid little punk ditties that hit, run, and disappear like bursts of ejaculatory madness or if they evolve into a more streamlined killing machine much like Black Flag did in their In My Head era. If Round The Bend is any indication, we’ve got some dangerous years ahead – head banging grooves and chilled prog breaks fuse to dial up one mind-fuck of a brew, and these boys don’t seem to be losing momentum on the spree. Can they keep it up for round 4? Well, we’ve got plenty of time to ponder that one as we tally the body count.