Hello (again?) dear reader, thanks for taking the time to peruse this review when there are so many other things that you could be reading, especially in this fine webzine.

Would you like to hear about finely crafted, Bowie-esque lyrics that speak to a universality of the human condition, whilst talking directly to YOU AND ONLY YOU? Would you like to hear my thoughts on skilfully honed pieces, delivered by ensembles that are so perfectly in sync they appear to have succumbed to a Vulcan mind-meld? Melodies so evocative that a single phrase can evoke the memory of a summer at the beach at age five, so completely that you can taste the salt? Too bad.

I want to talk about Noise, about Sound, or more specifically about volume, tone, and timbre, for this is what Amplified Guitar by Mat Ball is all about. Best known as a founder member of the band BIG|BRAVE (about whom, to my chagrin, I know next to nowt), this album marks Ball’s third excursion into the world of solo experimental guitar.

Of course, I could’ve just had a six-word review:  The clue is in the name.

BIG|BRAVE are on Southern Lord, home to certain other noisy fellows who know a thing or twelve about volume, gain, tone, and who regard the use of amplification as an instrument in its own right. Tone is the Holy Grail of guitarists the world over, heck, this righteous digitome even has a guru who devotes whole chapters to those dedicated pilgrims who tread the winding, tortuous path of the Camino de Tono.

A good guitar tone is worth a thousand words, and I’ll be damned if I’m going to expend my rationed word count trying and failing to sum up the incredible sound that Ball conjures from his equipment.

These are sounds that take skilful craftsmanship, a deft touch, and huge amounts of gain and volume. This is a tone that I can feel like grains of dry sand between my teeth, a sound so alive that it feels barely contained by the talent of its master at the reins. Granular, chiming, clanging, Ball wrests beautiful and terrifying sounds from his six strings to elicit a range of emotions and responses in the listener.

This is a deeply emotional instrumental album, one made deeper and more evocative by the skill of the artist…

That he can swing from a noise that conjures the howls of the last days of an aircraft carrier as it is dismantled in a maritime graveyard (Within The Billow I), to playing that can only be described as delicate and nuanced, speaks oodles for both his instrumental proficiency and his artistic sensibilities. Even when restrained, the listener can still hear the guitar and its amplificatory partner in creation straining at the leash Ball has placed around its neck. To corral this kind of volume, of energy, demands a thorough understanding of what you’re doing and real delicacy. In many ways mastery of the guitar.

To Catch A Light II takes a seemingly simple set of ideas and works with them, allowing them to expand into the available space. Ball restricts this space in which the phrases and ideas are allowed to roam causing anguished howls of frustration, almost beyond the bounds of capture.

Naturally, the opposite side of the coin to loudness is quiet and this is a tool ably utilised on Amplified Guitar. Within The Billow II is carried along within waves of sound that peak and trough, at turns brutal and delicate, showing the emotional range capable of being wrung out of one man and one guitar.

And this is what I would leave you with. Don’t dismiss this work as an onanistic display of guitar shop virtuosity, something that will only appeal to other guitarists of a certain bent. Nor is it volume over substance, nothing could be further from the truth. This is a deeply emotional instrumental album, one made deeper and more evocative by the skill of the artist in wringing something new from his instrument and from his oeuvre. And that’s gotta be worth forty minutes of anyone’s time. 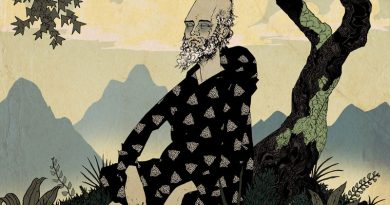