Black Math Horseman are a Los Angeles four-piece who formed back in 2007 and were a short-term project with a life span of only six years before the band members decided to go their separate ways. During that initial incarnation, they managed to release a demo, a full-length debut titled Wyllt and posthumously contributed a cover of All Apologies to a Nirvana tribute album titled In Utero, In Tribute, In Entirety. During that original stint, the band even managed to squeeze in a European Tour as well as festival appearances at Roadburn and Primavera Sound.

Initially reconvening in 2018, the band, which comprises of vocalist/bassist Sera Timms, guitarists Ian Barry and Bryan Tulao, and drummer Sasha Popovic became fully operational again in 2020. From the promo notes that accompanied the EP, I understood that both conceptually and lyrically, this latest release continues the storyline of the aforementioned Wyllt debut featuring the mysterious character known as the Black Math Horseman. Timms is quoted as saying that ‘This is where the character really comes into full bloom with their ‘black math,’ which is aggressive, manipulative reality shaping’. I also learnt that the album was composed as one long song, but the band had decided to divide it into chapters. One final point is that Timms has chosen to not play bass this time around in order to focus on singing, so this slot was instead filled by Rex Elle.

I understand why ‘psychedelic post-metal’ has been ascribed to the band, especially with Black Math Horseman affirming that genre description. It’s a track that builds in a traditional post-metal fashion but with moments that, both vocally and musically, remind one of the dark post-punk/goth-rock of Siouxsie And The Banshees. This helps focus your attention throughout as there is more of an emotive core and even some soul present, this is important as someone who can find post-metal a little meandering, mechanical and even deathly dull. A fantastic opener.

With regards to Boar Domane I am fairly sure that ‘domane’ is Latin for the king’s crown, whether this is the accurate and literal translation of the track’s title, it does have a medieval old-worldly feel to it. It’s like the kind of music that those folks who do historical battle re-enactments would potentially listen to, and this would tie into the sword theme of the EP’s artwork. However, that shouldn’t put you off, this is pure epic loveliness rather than embarrassing nods to power metal ala Manowar, Armoured Saint etc. There is instead a majestic dignity as opposed to naff camp bravado.

The Bough, the first single from Black Math Horseman, reminds me of Esben And The Witch’s darkwave/post-rock sensibilities as well as once again Siouxsie And The Banshees. It’s like the Banshees if they had of gone down a more ‘progressive’ route as opposed to silly ill-advised covers ala This Wheel’s On Fire or the dance-pop oddity that was Peekaboo. It’s absolutely fantastic, a veritable religious experience. Cypher, the shortest track here at over three minutes, has some tastefully injected orchestration added to proceedings and helps conclude the EP on a sombre and mournful note.

I didn’t encounter Black Math Horseman the first time around as I had yet to expand beyond the hardcore ghetto I found myself in, thus they were sadly not on my radar. The music performed here had me hooked from the first note to the last, and alongside Alain Johannes’ Hum and Spark solo albums, will undoubtedly help me through the grim weather conditions of the autumn months. 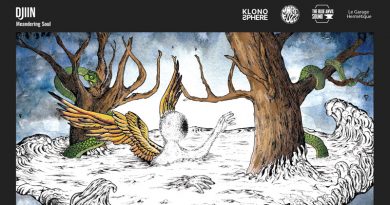