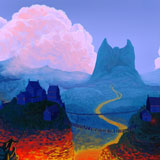 I’m a big fan of many species of instrumental music. I spend my working day sitting in front of a computer typing (recently mostly about Vikings fighting trolls, for 2000 AD) and I always have my headphones on. I find a lot of stuff with vocals to be too distracting but good instrumentals can become the soundtrack to my writing and help drive things forward. South Wales’ Thorun have had a place on my fall-back instrumetal playlist – amongst the likes of Karaboudjan and Astrohenge –for the last four years or so. The group’s last full length release, 2011’s ‘Chorus Of Giants’, is a jocund slab of chunky, catchy riffage that I find works especially well as a soundtrack for monster-punching writings. So, when I learned that Thorun had a new album out, I was naturally looking forward to giving it a listen.

2014’s ‘Festival At Fires Peak’ opens with a track of the same name and, after a rather low-key intro, digs right in with a characteristic Thorun groove. It’s all very cheeky and upbeat; more or less the same kind of swaggering, stonerish fare that Blood Duster slip in in-between grinding sessions.

‘Growth Of The Soil (Reprise)’ is a little bit chunkier and “bigger” sounding, but still falls well within the parameters of all that has gone before from the group. There’s one slight divergence from Thorun’s usual template in the form of a little added rawk lead guitar work.

After a jingly-ringy lead in ‘The Senseless Squeek And Gibber Of Ghosts’ comes in all sneaky and sly before opening out into more familiar riffing territory. The whole track has a bit of a wonky, stodgy FNM feel about it, which is definitely no bad thing.

‘You Dig’ is a two minute track of ominous ambience and sustained guitar chugs over a 1960’s monologue from a Vietnam vet who repeatedly uses the phrase “You dig”. It feels like the sparkly post-rock guitar and solemn strings of Godspeed You Black Emperor might be about to soar in at any second. But they don’t.

‘The Knarr’ is named after a type of Norse merchant ship and feels like its soundtracking some epic Viking Age seafaring tale. There are calm clean-toned oceans where the morning sun glints off the crash symbol, there are mighty waves of fuzzy chug and floor tom roll. There’s a lovely, lumbering Daft Sabbath riff that crops up and a nice slice of cartoon doom that follows.

‘The Bitch Leaving The Body’ starts with a cool little call-and-response thing between guitarists Jonny Evans and Keeran Williams, and bassist Neal Palmer which turns up again later on. Once again there’s a bit more lead work than in previous Thorun efforts and the track generally just feels a bit more straight forward than usual.

The best thing about instrumental music is, I suppose, also the oddest; you project your own ideas onto the tracks and, by association, the groups themselves. You develop your own concept of what a band is trying to do or say based upon the emotions and mental images you get from listening to their output. That’s the same with all music of course but without lyrics or vocal sounds to guide you one way or another you’re more free to drift off in your own direction. In my head I’d built up this picture of Thorun as grinning purveyors of mischievous, hook stuffed, chugging grooves, but ‘You Dig’ has kind of thrown a spanner in the works there. I’m left wondering how seriously I’m supposed to be taking the band and how that effects my perception of the rest of their output. Hmm… Ah fuck it, I’m just going to ignore it the same way we all ignore ‘Night Of The Shape’ on ‘Let Us Prey’. Make of Thorun what you will, I’m still nodding along happily and if you’ll excuse me I’ve still got trolls to kill. 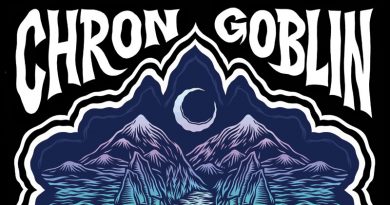