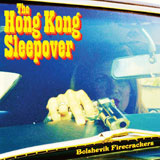 Sitting in my car, grinning like a fucking idiot ‘Taste The Chain‘ rolls into the speakers and starts to blast out, encompassing me in a happy sound of heavy riffs and rough vocals. My immediate feeling is Motörhead, if The Hong Kong Sleepover don’t take any inspiration from the greatness that is Motörhead then I’m completely surprised. Already happy, the track rocks hard into an epic guitar heavy portion. You’re kicked in the nuts by one, until the second rolls in from beyond. Epic riffing with the drums smashing away hard in the background.

Next up is ‘The Ballad Of Malcolm Reynolds‘ and fuck a doodle do, did I not see the connection at first. Towards the end of the track I’m hearing ‘no power in the verse’ and thinking why does that sounds so familiar… a quick look at the track name and Malcolm Reynolds is right there. BAM! A freaking superb ode to Firefly right there with some beautifully heavy, deep dark riffs. Loving the first two tracks, ‘no power in the verse can stop me’ as I roll on into ‘Hangman‘.

‘Hangman‘ follows suit and I love the lyrics in this one. It kind of follows on quite nicely, heavy on the rough vocals it pounds a nice classic vibe into your brain. Slower riffs and a deep bass, I really feel a lot more classic rock vibes from this. It’s just got that bad ass retro feel to it and really captures a lot of the rawness that seems to be missing these days.

For me, ‘The Ballad Of Malcolm Reynolds‘ was the best part of this album. Until of course I came across ‘Boomstick‘ and at that precise moment I shot a load in my pants as I thrust a fist in the air. This track may roll at a slower pace than the others, but it holds it’s hard vocal edge, dirty riffs and the fuck hard drumming! Not to mention it’s an ode to Evil Dead. GROOVY!

We step up the pace gain with ‘Big John‘ I’ve no idea who big John is but given the lyrics I don’t want to fuck with him. Another track I love the lyrics in and finally a good place for bass. It’s been pretty heavy on the guitar riffs so far and the bass has been sitting away in the background. But here with big dick John it makes it’s louder appearance and it fits well to the ass kicking you’d expect from the tracks title character.

The faster pace continues into ‘Bleed To Win‘ where the vocals also seem to take on a slightly harsher edge. Not too much to say though, it’s a balls to the wall, do things faster track. A nice album mid-way to just thrash about to.

Next up is another thrash track, get in the mosh pit and just kick some ass. ‘Draw The Line‘ is a riff heavy, drum smashing 3 minutes of fun. “One is 6 the other is 9” fun lyrics and fun tune. One to enjoy while you do the hoovering, get it done quicker and you’re not gonna lose your drivers license.

‘Die Another Day‘ slows down the pace, deep riffs, slower drum beats, and a thrumming bass in the background. This is a track about cheating death, and rolls along with a classic feel to it. It’s a good 50/50 mix of vocals and instruments, with each rocking heavier at times. The Instruments softening down so the heavy gritty vocals can take precedence and the vocals then going non-existent to give way to some epic guitar riffs.

Picking up the speed we roll into ‘356‘, fast guitar starts us with that deep bass we’re growing to love through this album. Intro. Then BAM!! . . Everything kicks in, drums, heavy, guitar, riffing its nuts, throbbing bass and finally vocals. An epic track about kicking ass that’s fast paced, heavy rocking and full of lovely feedback. It sets the pace perfectly for ‘Not Enough Whiskey‘, sadly the final track on the album. A foot stomping bar fight song, meant for nothing more than drinking a shot of whiskey and having a great time with your friends. Lyrically it holds its own with some great hilarity to it. It’s pretty much what you’d expect as an ender to this album, get fucked up and have fun.

This was a really fun album to listen to, the tracks are energy induced fun with some class lyrics rolling around in there too. I’d love to see these guys live as I bet it would be fun as fuck and would no doubt end up with a shit load of beer, whiskey, wenches and bar fights. 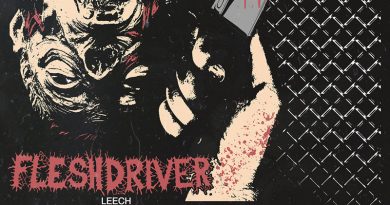