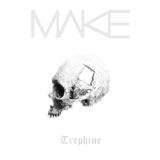 It’s an odd name isn’t it, MAKE? I mean, you know roughly what you’re getting into when a band is named, I don’t know, Bongwizard, or, say, Hammerslayer, but a neutral-sounding name that suggests nothing in particular makes it difficult to judge exactly what you’re going to be hearing, and may even serve to let a band slip under your radar.

In the case of MAKE that would be a terrible, terrible error.

Sure, a – slightly misleading – hint as to Trephine‘s musical content is given by the skull on the ice-white front cover and the use of a decidedly ‘Germanic’ font for the album title, but these too may pass unnoticed if you’re one of those modern folk that don’t buy physical media.

Coming into Trephine cold the very first thing to be heard is a slowly rising storm of barbed-wire psychedelic guitar, a distant frenetic cloud of eastern drone delivered by guitarist Scott Endres, soon joined by the sinuous, snaking bass of Spencer Lee and the gliding drums of Matt Stevenson before Endres’ guitar switches into a bone-crunching, doom-filled riff that sizzles and crackles with distortion and a throaty snarl starts up. This is ‘Ancient Tongues’ and we are on our way down the rabbit-hole, dragged along in the wake of MAKE.

The sound of ‘Ancient Tongues’ is an unholy amalgamation of the bestial snarl and animalistic percussive THWACK! of Unearthly Trance, circa Electrocution, welded to the open-plain desolation and spacious eastern modes of Across Tundras, sprinkled liberally with a touch of Harkonen/Helms Alee mainman Ben Verellen’s twinkling delayed guitar stylings.

Seems like a slightly mismatched combo on paper but in execution it works beautifully – swooping from claustrophobic, hemmed-in weighty riffage to soaring, beatific skyward spaciousness like it really ain’t no big thang.

The churning psych-crush of blissed-out instrumental ‘After The Dust Settles’ bridges ‘Ancient Tongues’ and next track, ‘Returning To The Ruins Of My Birtplace’, wherein a lurching chug foregrounds a vast, kaleidoscopic tapestry of guitar drone, hanging in space above the anchoring girth of rolling bass, drums and off-kilter guitar stabs. Chiming strings offset the bestially phlegm-ridden vocals that creep in as the track progresses, with doom-laden chording taking the track to its eventual demise.

A plaintive violin appears to join the crystalline guitars that open the initially skeletal ‘…And Time Came Undone’, quickly chased away by piledriving guitars and some very throaty vocals as things take an early-Isis-esque turn. Chugging, surging rhythm and sharp discords hold sway before dying away to be replaced by those glassy clean lines from the intro and eventually disintegrating into abstract throbbing ambience.

This balance of gritty, earthy chugs and chording flowing into quicksilver leads and clouds of effected sound, grounded by gliding drums and solid-yet-liquid basslines is a constant throughout Trephine, and nowhere is it more deftly handled than on ‘Valhalla’, a wholly instrumental piece that seems infinitely shorter than its near seven minute length. As beautiful and utterly sublime a piece as anything else contained herein.

As for the rest of the recording, well, ‘Surrounded By Silent Lies’ mines the early Isis vibe more successfully than even Isis themselves ever managed to, if you catch my drift, ‘Rotting Palace’ makes use of clean vocals in amidst the crunching guitars and snappily chorded basslines, and closing duo ‘Scorched Skies’ and ‘Into The Falling Gray’ are, quite simply, IMMENSE.

MAKE find themselves in the frankly enviable position of essentially sounding exactly like themselves, a rare commodity in this day and age. I would be loathed to lump them in with the post-metal/post-rock crowd as, well, they would stand head and shoulders above any other band they were put next to.

Isis is simply a band I am using as a touchstone here as, really, MAKE have a much more organic sound and feel than Isis ever did at their heart. I’m simply attempting to couch MAKE’s sound in a vernacular you can relate to. I could mention Explosions In The Sky and others of that ilk but such comparisons would be ultimately baseless, with only really a vague similarity at times.

I guess what I’m struggling to tell you is that MAKE sounds like MAKE and Trephine is a beautiful, rewarding listen that really ought to be paid attention to on its own merit in order to be fully appreciated.

Trephine is a rare gift in these carbon-copy days.

Primitive Man ‘Home Is Where The Hatred Is’ LP/DD 2015