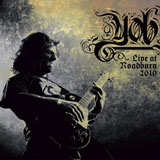 “We’re gonna play four songs and that will be one hour” says Yob mainman Mike Scheidt at the beginning of this Roadburn 2010 set, thus letting the audience know exactly what to expect – cosmic, sprawling psychedelic doom of the highest order (no pun intended). Yob are an intimidatingly dense enough proposition when recorded in a studio, and live they pull no punches and give no quarter.

Scheidt’s guitar spews out churning world-class riffage that can be angular and heavy as lead or ethereal and deeply psychedelic by turns, all the while wailing like Geddy Lee on downers then dropping down into the foulest pits of hades to dredge up a bestial roar, bassist Aaron Reiseberg holds down the low-end like it ain’t no thing and anchors the flightier parts down with a rock-steady pulse and skinsman Travis Foster smashes seven bells out of his kit and provides the driving propulsion when needed.

Yob are a well-oiled, fluid doom metal machine, and on Live At Roadburn 2010 they prove it effortlessly to both your ears and your eyes.

A CD and DVD package housed in a rather handsome digipack – following on from the Wolves In The Throne Room CD/DVD, from back in 2008 – Live At Roadburn 2010 is an immensely tasty proposition. Both CD and DVD contain the same four tracks and the same audio content, but obviously with a DVD there is the added bonus of the visual element. Shot unobtrusively by a couple of cameras, located out in the auditorium and on the side of the stage, this is very much a no-frills affair: no fancy angles or swooping cameras, just top-notch quality footage of three guys onstage KILLING IT. Who the hell needs any more than that?

As far as the set list goes, the band wisely chose to go with an even split between the Yob of old and the newer material, with ‘Quantum Mystic’ and ‘Kosmos’ from The Unreal Never Lived taking care of older business and ‘Burning The Altar’ and the slow-burning tones of the title track coming from then-new album The Great Cessation. A nicely representative choice of tunes when one only has an hour in which to play and most of the material to choose from is pretty damn epic in length and scale.

‘Quantum Mystic’ is the opener, building from ominous flanging, phasing guitar and an almost military march into a swamp of churning psychedelia. Driving riffs pile-up as Scheidt howls in that distinctive Geddy Lee-meets-Dave Mustaine voice, and the track just crushes. With the added bonus of visuals, one can see clearly exactly how physically invested in the music Scheidt is. His focus and dedication writ large on his face and swaying posture.

Next up, the rolling angularity and crushing bulldozer rhythm of ‘Burning The Altar’ detonates on the crowd, replete with ‘Slayer does Doom’ staccato chug-a-thon section. In between tracks, Scheidt’s natural stage presence is notable, with an easy rapport with the crowd and his self-effacing shout out to Eyehategod, who were to follow the set, showing that he’s as much of a fan as a musician still.

‘Kosmos’ – dedicated to Dark Castle, frequent touring partners and home to Schedit’s significant other, Stevie Floyd – is caustic and propulsive doom, churning, jagged, dramatic and bestial by parts and in direct contrast to the sprawling epic tranquillity of set closer ‘The Great Cessation’.

This mix of plangent psychedelia and soaring vocals has an epic feel and a melancholy touch, leading to a severely tripped-out end section that brings the curtain down on Yob’s set for the night.

This is a superb documentation of a great show by a great band and should be picked up by anyone with a love of heavy music. Yob have guts, grit, determination and a raging fire in their collective belly, and on Live At Roadburn 2010, those qualities are clearly on display for all to hear and see.

* Track is named wrong and is Quantum Mystic