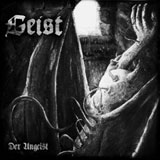 Geist are the latest signing to Israel’s Totalrust roster, the label is typically known for delivering acts that champion the dark metal/funeral doom end of the spectrum, but with ‘Der Ungeist’ (roughly translated ‘The Demon’) black metal is the name of the game. Despite the majority of the track titles, the band is not of Germanic origin, but indeed from Totalrust’s home territory Israel, which certainly ignites curiosity (as well as slight confusion!).

Taking influence from the early masters of the BM scene with the buzzsaw guitar sound and lo-fi production values, certainly no new ground is trodden here, but the end result is far from terrible. Recorded live with no retakes or post production wizardry, each track is presented in its rawest possible form, retaining a more organic feel and harnessing the ferocity which is prevalent throughout the vocal delivery and intense guitar work on display here.

‘Mord’ opens up the LP, hitting you square in the face and leaving you in no doubt as to where you will be lead over the course of the seven tracks that make up ‘Der Ungeist’. Following the very brief intro of rumbling dark ambience and guitar feedback, they launch into attack mode. Very traditional sounding black metal riffs underpin the harsh vocals which again hark back to the early Norwegian style, nothing new here, but their heart is certainly in the right place. As the track progresses the blast beats subside, allowing for slower paced segments, forging a very melancholic sound typical of the new wave of ‘depressive black metal’ (acts such as Loss, Coldworld, Austere etc.), this certainly sees Geist at their best, creating turbulent and very bleak atmospheres in which to lose yourself in.

‘Von Blut’ follows a very similar path, whilst ‘Der Wald’ almost acts as a tribute to Burzum with its main slow, repetitive riff, layered with just the right amount of satanic menace and apocalyptic gloom, crushing you into submission, before dropping a truly nasty riff towards the tail end of what is, probably, the standout track of the album.
‘Tot’ acts as a sombre intermission before heading into the intense battery of ‘Northern Pride’ and the title track itself ‘Der Ungeist’, following along the same lines as the opener ‘Mord’ but with less slower, brooding breakdowns. ‘Taub’ rounds the album off nicely, a dark intro of howling winds and distant clattering’s heralds the maelstrom of massively overdriven guitars and vocal screams, serving up a very atmospheric closer and is generally unsettling all round.

Despite their lack of originality and pretty predictable song structures, Geist do throw up some pleasant surprises along the way, they shine during the mid-paced segments but the intense variations are not to be taken lightly either. Fans of old school black metal will certainly find pleasure here, but for anyone who craves for a bit more experimentation in their BM diet will have to find their fix elsewhere. 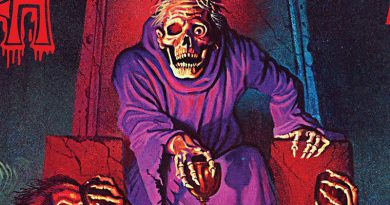