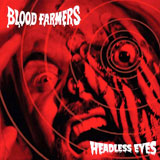 New York City’s doom trio Blood Farmers owes a firm nod to the now defunct Leaf Hound Records who resurrected the band’s blood-soaked grooves with reissues of their eponymous debut (originally released in 1995) and 1991 demo Permanent Brain Damage – the Japanese label has been somewhat of a lifeline for cult/underground rock bands whose success and survival depends on rabid fan worship and word of mouth; the niche is small, but international publicity can be one hell of a spark and motivator, and coming off the new buzz for their old material, Blood Farmers’s Eli Brown (vocals) and Dave “Depraved” Szulkin (bass, lead/rhythm guitars) decided to end their extended hiatus and commit to the killing fields with appearances at both Baltimore’s Doom Or Be Doomed festival (2007) and Japan’s Doom Age festival the following year. Now joined by Tad Leger on drums, the revamped group brings us the first new slice of meat in nearly 20 years in Headless Eyes – as expected, a shit ton of blood thirsty listeners have been waiting for this one and I doubt they’ll be disappointed.

Believe it or not, the album’s been circulating for several months, released in March 2014 on the band’s own Resurrection Productions label; with the vinyl release set loose on the streets via Patac Records, we’ll get the warmest take on ass kickers like album starter, Gut Shot – crisp percussion, riffing blues and doom – it’s reminiscent of some of the earliest (and best in my opinion) Church of Misery grooves; the mid track break commands a mid-tempo rocking swank, taking coolness cues from Road To Ruin (Church of Misery) before settling into some sweet solo shreds; it’s pretty standard fare for most trained ears, but you can smell the scent of seasoned musicians, and these dudes know how to write. The 10+ minute title track is a splatter platter of stretched out slow grinding jams, with wails, croons, and movie samples referencing full on psycho/sociopathy to please the most twisted of minds; at this point in the journey, the band easily reassures its fans that they’ve lost nothing since their 90s heyday, when songs like Bullet In My Head and Orgy Of The Rats were underground calling cards for listeners who drank the band’s evil like mother’s blood-milk; but the progressive synth leanings of instrumental Night Of The Sorcerers and acoustic arrangements of album closer (and David Hess cover) The Road Leads To Nowhere show an evolving desire to push boundaries and expound on an already well tread course. It’s an intelligent creative decision and one that could very well secure the trio’s future success (and relevance).

But a band like Blood Farmers is probably less concerned with making statements and staking claims on specific musical territory than they are on, allowing inspiration to guide their next groove The Creeper (instrumental) is a slow evolution, lean and stripped before culminating in a funk-blues rock out; don’t mistake these bursts of energy as a smiling face for this outing – the album’s 44 minutes is anchored in gore drenched melancholia and these progressive flourishes are just variations on one (darkened) theme. And despite the ethereal vibes and delicate noodling that occupy nearly half the record, the band is anything but inconsistent in its delivery – just when you think you’ve gravitated to the next plane, songs like the smoke out dirge Thousand-Yard Stare jar you back. This ain’t lighthearted shit, and the band reminds you (unapologetically) that you’re tethered to their nightmare.

But in the end, if the music rocks, most of us could care less about the tethering (with some, like me, actually reveling in it), and I’m pretty sure Brown and Co. understand that straight up simplicity. Indeed, it’s a damn fine day to see this trio back for more grit, gristle and debauchery. So for now, let’s hail to the once unsung heroes of gore…long live the horror. 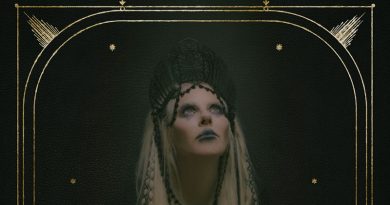