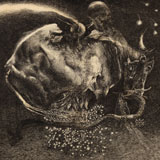 Half Blood marks the third record for North Carolina’s Horseback, the brainchild of guitarist/vocalist/producer Jenks Miller. Ladies and gentlemen, prepare yourselves. I am probably about to sound massively pretentious – for we are about to talk about drone.

Since its origins, Horseback has been focused on creating a hybrid strain of psychedelic rock, inspired by additional elements varying from black metal to country music – and in particular, drone and ambient noise. Half Blood is no different.

Opener ‘Mithras’ sets the pace with a sinuous rhythm section underscored by warm organ and guitar tones that give off a ‘70s vibe. Keyboards shimmer beneath the tight groove of ‘Ahriman’, while skittering woodchimes and reverbed clatter are gradually engulfed by church organs and Theremin noise on ‘Inheritance (The Changeling)’.

Somehow, the record overall feels both measured and marked by a muscular dread. Blackened vocals continually scratch and scrape throughout Half Blood (although clean vocals make a brief appearance on ‘Arjuna’), but there is also a tangible current of Americana to the record – calling to mind images of canyons, vultures and herds of grazing bison.

The really ambient/drone aspects of Half Blood are showcased in the ‘Hallucigenia’ triad that makes up its second half. ‘I: Hermetic Gifts’ surfs in on rippling fuzz and hum, coloured by light touches of piano and harp while Miller snarls like a cornered wolf. ‘II: Spiritual Junk’ is lent a menacing, thunderstorm feel by a deep, dark low-end rumble and cascading drums, and ‘III: The Emerald Tablet’ unites an almost bagpipe-like guitar hum with further washes of languorous keyboards and programmed drums. However, the latter unfortunately becomes plodding, slightly defeated by the tick-tock of its electronic rhythm.

Admittedly, it does take a few listens before some songs start to stand out, and within the more ‘rock’-based tracks (‘Mithras’ and ‘Ahriman’) there is a slight danger of repeating the same ground covered on the album’s predecessor (The Invisible Mountain). But despite this, Half Blood is still a worthy addition to Horseback’s back catalogue, both elaborating and moving (slowly) ahead of the territories explored on previous recordings. This is meandering, hypnotic rock that floats on an ever-shifting sea of alternately dreamy and doomy textures. And as all the best doom/drone does, it certainly mesmerises.