Godflesh will be the headliners of the 2013 Roadburn Festival with a very special performance. Roadburn are so elated (nearly speechless!) to be able  to announce that Godflesh — J K Broadrick and G. C. Green — will be joined by Robert Hampson (Loop, Main) to perform Pure in its entirety for the first time ever at Roadburn 2013, on Saturday, April 20th.

The  lineup is the same as the one that recorded the album in 1992 and  hasn’t played a live show together in 20 years. For this reunion to  take place at Roadburn is a huge honor for us and we hope that it will  be an equal thrill for all you fans as well. 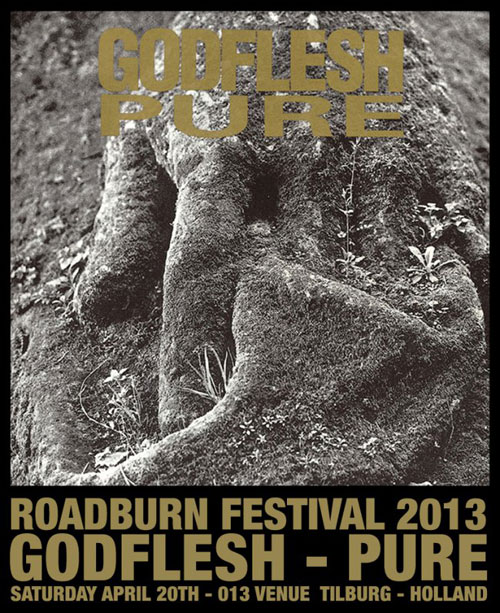 With the crushing Streetcleaner performance from the 2011 Roadburn festival still in mind, this show is gonna blow minds as Godflesh add Robert Hampson to their already potent sonic attack. Hampson is known amongst space rockers as the founder of Loop, a seminal band in recent psychedelic music that combined the sentiment of Kraut Rock with the guitar-driven sonic attack of bands like the Stooges and MC5. After becoming increasingly more experimental, Hampson ended Loop and formed Main, a group that became an extremely important fixture in experimental and ambient scenes while lasting for 16 years.

The reunion of this lineup is a huge surprise to those who follow Hampson, as he had given up playing the guitar altogether in favor of compositional elctro-acoustic music. His addition to the Godflesh lineup for the Pure album yielded a more focused, much more sonically intricate sound and propelled the album into history as a landmark of metal / industrial music.

Combined with Broadrick and Green‘s progression as songwriters and musicians, Godflesh created an extremely influential album in Pure, and Roadburn considers it a coup to be able to present the original lineup playing the album at our festival.We hope you share our excitement about this one-of-a-kind event and we hope to see you all at Roadburn 2013!