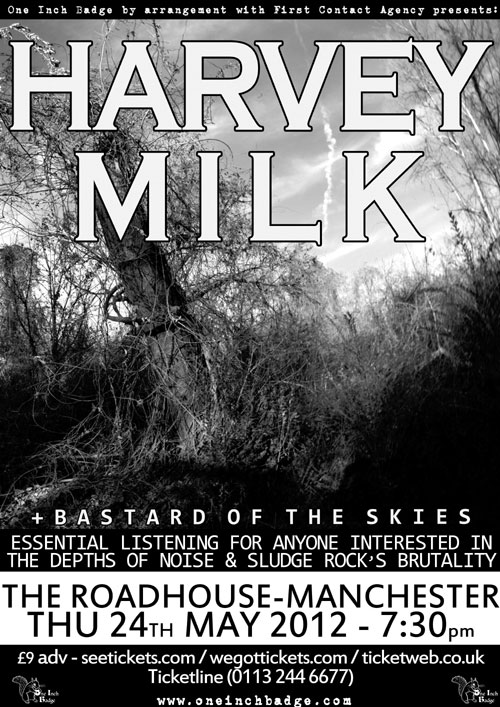 After their recent UK/Euro jaunt with JUCIFER, noise rockers BASTARD OF THE SKIES are chuffed to announce that they will be supporting the mighty experimental rock/noise band HARVEY MILK on Thursday 24th May @ The Roadhouse in Manchester.

A little bit about the bands….

HARVEY MILK are an American experimental rock/noise rock band that formed in Athens, Georgia in the early 1990s. While Harvey Milk invariably draws comparisons to the Melvins, due to their penchant for slow, heavy riffs, the band has touched upon such artists as ZZ Top, Led Zeppelin, Leonard Cohen, and Kiss as influences in their music.

Gigging heavily across the UK the band has evolved into a brutal and unrelenting monster. The drums pound, the bass rumbles, the riffs crush.

Even the occasional moments of melodic respite pave the way for even bigger, more devastating and ferocious, riffs. Along the way the band are proud to have shared the stage with such titans as Baroness, Kylesa, Today Is The Day, Jucifer, Black Sun, Lazarus Blackstar, Volition, Conan, Alunah, Undersmile, Witchsorrow, The Sontaran Experiment and many more.

RIP Pete – May You Rise To Thunder!