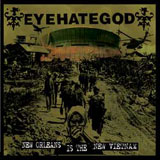 Much has happened in the world of Phil Anselmo endorsed NOLA sluggers EyeHateGod since their inception, Christ, much has happened since the last time they tripped (ahem) to the studio for the odds and sods stop gap compilation ‘Preaching the End-Time Message’ way back in 2005; the most influential being the destruction visited upon the bands home town by Hurricane Katrina and vocalist Michael Williams’ arrest, imprisonment and subsequent recovery from a serious heroin addiction.

To think that this band have managed to last 24 years at this point is an incredible feat. Following a series of shows at home and abroad since 2008 they have seemingly gathered momentum and with enough downtime between the members other projects for them to prepare a new album, they have finally gathered enough material and gotten round to giving an official release (on green 7″) to the new song they debuted at Roskilde Festival last year.

If you haven’t heard ‘New Orleans Is The New Vietnam’ yet, then you are in for a treat. The time sober and away has seemingly done the band the world of good and they play with a deep blues swagger that recalls the highlights of earlier material, but with a maturity that has focused the music into a sharper beast.

Williams still gargles and growls, bug eyed like a lunatic, but he does so with a more commanding air of authority over a riff so huge and towering, yet catchy it could almost be at home on the new Down EP, if not for the gloriously chaotic rhythm section. Meet the new EyeHateGod, same as the old EyeHateGod, better somehow better.

Gloriously unhinged, this slice of dystopian nightmare takes everything fans of this band love and kicks it up a gear. On the strength of this track, I cannot wait for the album and hope it sees a release before the end of the year. 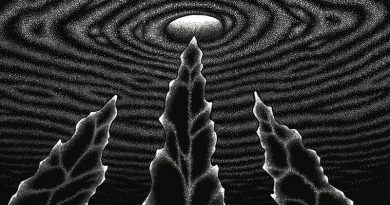