The countdown commences as we get ever closer to Supersonic Festival’s milestone tenth birthday and today we are glad to announce the day ticket line-ups, elaborate on some of Supersonic Festival’s personal highlights and offer more insight into some of the key themes that structure the festival this year. Without further ado, here is the latest news… 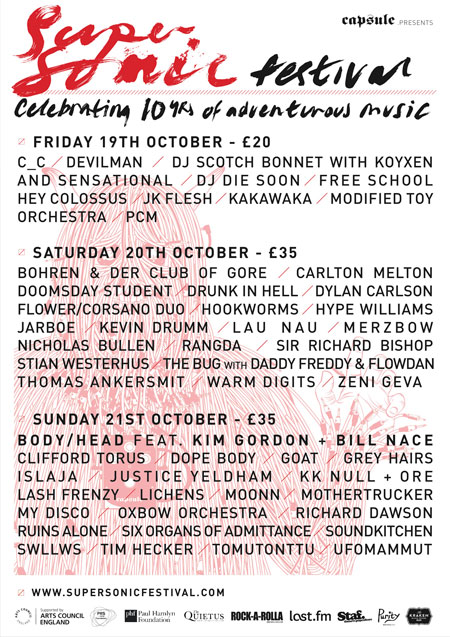 Ufomammut have just confirmed that they will be performing their new album ORO in its entirety at Supersonic, so for those who missed this in London, here is a wonderful opportunity to feel the full force of this titanic release. Ufomammut kindly offered Supersonic an exclusive sneak peak at their brand new video to accompany the album track Sublime from ORO: Opus Alter which you can check out below.

Another epic musical performance which Supersonic are keen to emphasise is Oxbow Orchestra. Expect strings, woodwinds, brass, operatic backing vocals and classically contained renderings of the Oxbow song book, featuring Eugene S Robinson and Niko Wenner from Oxbow and an Orchestra who will deliver songs new and old in a format unaccustomed to the blood and sweat of a typical Oxbow outing. The textbook definition – ONCE IN A LIFETIME.

An installation we wish to highlight is Kim Gordon‘s presence at the festival, which will extend beyond her performance as BODY/HEAD as she is to present a unique art installation entitled Reverse Karaoke. This collaborative installation by Kim Gordon and Jutta Koether consists of a painted Yurt style tent housing a lo-fi rehearsal set-up with guitar, microphone, bass, and drums and a basic PA system. The visitor is invited to play the instruments and record their own music along with a pre-recorded vocal track of Kim Gordon’s voice. The track is recorded live by a sound engineer who burns two CD copies of the track, while the visitor(s) decorate two CD sleeves using materials in the gallery. One copy of the CD becomes part of the piece itself on display in a record box, and the other the visitor takes home. Reverse Karaoke was originally commissioned by Electra for ‘Her Noise’, South London Gallery, 2005.

Finally, something that Supersonic Festival would not want you to miss is Vinyl Rally, a large-scale installation combining sound art, video art and kinetic sculpture into every kid and kidult’s dream-hybrid; an immersive participatory play-set playing off vinyl fetishism, video arcade mystique and the machismo of motor sports in a video game played within a real world setting! Classic first person video racing is simulated as remote control cars with styli attached, race across a track constructed from a mass of disused vinyl records. Transmitting sound (produced as the styli skim along the vinyl surface) and vision (from wireless spy cameras mounted to the front of each car) to re-engineered old school racing consoles with immersive 50inch flat screens. Here players navigate the course from the vehicles point of view, not only controlling the cars movements, but also the parameters of the resulting sounds they create via a series of unique audio effects mounted onto the dashboard giving each car its own distinct aural flavour. These sounds are emitted from speakers built into the seats causing them to vibrate in correspondence with the movements on screen, producing a personally immersive experience aurally, visually and physically that can only be truly appreciated seated at the controls.

FINALLY, DELVING INTO THE THEMES OF THIS YEAR’S FESTIVAL…

For their tenth anniversary, Supersonic Festival have developed some key themes in which they have structured some of the events and special appearances around.

Perhaps the strongest theme which Capsule are embracing is independence and mavericks in music, the idea of maintaining integrity and independence in these testing times. This is an important theme to Supersonic Festival as they enter their tenth year and have to find ways of reaching out to new audiences as well as keeping their existing fanbase happy! The market stall at the festival is always full to the brim with independent labels and distros selling their own merchandise, a testament to Capsule’s own support of the independent scene.

Here is a reminder of some of the events that are part of this theme:

‘You Can Be You’ – with Penny Rimbaud (Crass), Jarboe (formerly in Swans), Eugene Robinson (Oxbow) – You Can Be You (title of Honey Bane/Crass single)

Offering an insight into some of the hows and whys of maintaining an independent spirit whilst on the very edge of the avant-garde, this panel will feature a number of maverick artists. How is the drive to make art sustained under sometimes-difficult circumstances? After many years of writing and touring music, will the desire to create ever be satiated?

Supersonic Festival is now in its 10th year, beginning as a one-day event it has become an internationally renowned weekend of music, art and more. The panellists have hugely influenced the festival producers, as well as many other artists performing at Supersonic. ‘You Can Be You’ will offer a fascinating insight into the drive and motivation behind some of the most prolific experimental artists around.

Given the success of Imperfect Cinema last year, Capsule have invited the team back to host a free workshop exploring DIY modes of filming and cinema only this time, the footage people gather using Super 8 cameras will be edited and used as visuals for Drunk in Hell’s performance. All in all, an exciting opportunity for festival goers to be part of the performance and utilise the industrial backdrop in a highly creative way. Imperfect Cinema will also be screening the film ‘Bullshit Detector’ – their film about the Crass compilations, which ties in nicely with Penny Rimbaud’s guest appearance.

Oxbow – The Luxury Of Empire

Mariexxme’s lush documentary “The Luxury of Empire”, filmed on the French leg of Oxbow’s 2009 European tour offers an intimate portrait of a band in full artistic maturity. It sees them undergoing the daily trials of touring with grace and provides sometimes touching and humorous insights into an otherwise mysterious band. The film’s dark, cinematic aesthetic was inspired by the atmosphere of Oxbow’s recent work. It echoes its title and is interlaced with live performances and candid interviews in which the band peel away the layers of their processes and which bring the viewer as close as it’s possible to get to a band without being in it.

View the trailer below…

A strand of film programming curated by Jason Forrest at Network Awesome.

“Everyone likes to make things, sometime they end up being famous for it but often they just end up looking like freaks. Here’s a salute to those people who either did it themselves, made something up, or just did it like no one else.”

Network Awesome is a new online TV site that curates the media film, documentaries, and video collections from all eras of broadcast history. It’s free, not full of junk, and it broadcasts 6 new shows each day. The archives are stand-alone repositories of media, available anytime and are, like, totally social so you can share it with your friends. Root around in there! You’ll be amazed at what you find.

‘The Art of Listening’

Supersonic in partnership with Sound and Music present a half-day extended panel discussion exploring contexts for the presentation of sound works and performances and approaches to listening. Bringing together artists, academics and industry professionals the event is an opportunity for a discussion of how artists and producers can best stage work, how audiences can be best encouraged to enjoy it and how we can all become better listeners.

The other key theme which Supersonic Festival are exploring for their tenth birthday celebrations is myths and rituals. Interestingly two of the relating events are centered around the myths and rituals of Birmingham itself, the birthplace and home of Capsule/Supersonic. Illustrator Stephen Fowler’s Wildman life drawing class, using a semi tame Wild Man as the model is the perfect example of these themes in action. Here are some more of the events which are part of this alluring theme:

Outcrowd will present: Festival of the Rea.
Four years ago the Outcrowd stumbled upon some curious and bizarre old traditions based around the area of Birmingham’s birth place, the crossing of the River Rea, now known as Digbeth. Intrigued we delved further, eventually leading us to discover the lost Festival of the Rea, with roots in Pagan and traditional religions, echoed in similar festivals still celebrated throughout Europe. For Supersonic Outcrowd will re-create elements from the Festival of the Rea and build a shrine known as the “house of Beorn”, the first to be built in the area for over a century. A selection of artists with mythical potential will be invited to create offerings to this shrine and members of the public will also be invited to contribute their own offering to this ramshackle, weathered and sacred cabin during the festivities. There will also be a walking tour of Birmingham’s city centre, exploring the hidden history of these celebrations of spirits and beasts which can still be found in the architecture of our modern metropolis. As the sun goes down on the last night of the festival, past and present all will come together in a climax of channeled energy and sound where the magic of the event and the natural powers of the river will awaken and release the long lost spirits of the city they call home.

Sian Macfarlane presents a new work exploring the Victorian séance, and its roots in the pain of the loss of loved ones.
An exploration of the world of the séance, popular in Victorian times, where spiritualism was at its height, this piece will incorporate family snaps, slides, and super 8 footage as well as found sounds.

Feat. Conny Prantera who exhibited last year and Mark Wagner of Sunday Mourning – part of the myths and rituals theme.

That which is below is like that which is above that which is above is like that which is below to do the miracles of one only thing. And as all things have been arose from one by the awareness of one: so all things have their birth from this one thing by adaptation.
The Sun is its father, the moon its mother, the wind hath carried it in its belly, the earth its nurse.
A performance inspired by the Heavens Above, created by Mark Wagner and Sanna Charles of S&M and Conny Prantera, with the collaboration of Emiliano Maggi of Estasy, photographer Marko Righo and costume designers Kamellia McKayed and Gloria Carlos.

Soundkitchen
At its core is a collective of composers with a background in electroacoustic and experimental music. They will present a collection of manipulated field recordings in response to myths and memories around Digbeth, the River Rea and its creatures.

Trash Humpers
Walking his dog late at night in the back alleys of his hometown of Nashville, Korine encountered trash bins strewn across the ground in what he imagined as a war zone. Overhead lights beamed down upon the trash in a Broadway-style that Korine found very dramatic. They began to resemble human form, beaten, abused and “very humpable.”[2] Korine remembered, as a teenager growing up in Nashville, a group of elderly peeping toms who would come out at night. He has described them as “the neighborhood boogeymen who worked at Krispy Kreme and would wrap themselves in shrubbery, cover themselves with dirt, and peep through the windows of other neighbors.”[3] Putting these two ideas together, Korine found conception for the film.

Trash Humpers is a 2009 American drama film directed by Harmony Korine. Shot on worn VHS home video, the film features a “loser-gang cult-freak collective”[1] and their whereabouts in Nashville, Tennessee.