Today I learned what Golgothan actually meant, and I’m not sure I was ready for it… Lousiana’s Golgothan named themselves after a demon that is formed from human excrement, in this case, particularly from the crucifixion victims that shared the hill where Jesus was crucified. So, yeah, there you go. It probably gives you a fairly good idea where this record is coming from too, and Leech is out now through Lacerated Enemy Records.

The sinister music box tinkling from opener The Rack is one of those things that is creepy no matter what the circumstances, coupled with the snarling rantings of probably the Golgothan (?) is immediately unnerving. The title track is bullish, filthy death metal with a dense low end and a nice clean production that helps to highlight the surprisingly technical approach. Teeth to Eat You is part barrelling Black Dahlia Murder style modern death and part brutal doom chugs, while the churningly visceral Parent Organism does a lot of chuggy, technical, almost djent-style guitar work; it is a very modern sound for something I expected to be sludgy or grimy.

Leech is a powerful release full of intense carnage…

Lard Is My Shepherd channels latter day Cannibal Corpse in its waspish and serrated guitar work, and those drums are just magnificently balanced within. As the album progresses, each song becomes another attempt to outfox your expectations, really cranking up the bass punishment and the songwriting keeps getting better. The pyroclastic serpentine nature of Christian Mingle Killer is something to behold in full flight,

Whether you go for this kind of more modern interpretation of death metal’s most brutal elements or prefer it to be simpler and more ‘old school’, you should find something to like on Golgothan‘s debut. At times, they lean a little towards deathcore clichés, but most of the time their material is super strong, incredibly brutal, and very memorable. Leech is a powerful release full of intense carnage, and you’d be daft not to give it a good long look, before the shit demons catch you. 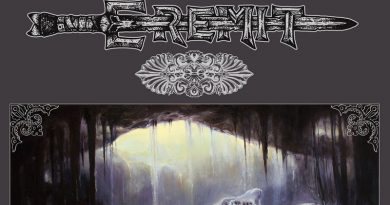