Any discussion of heavy, psychedelic music over the course of the turn of the millennium must include New York’s legendary (mostly) duo White Hills. The band, consisting of vocalist, guitarist, and figurehead Dave W and bassist Ego Sensation, have carved a unique path through the psychedelic underground, becoming far and away one of the most important, and certainly prolific bands in the domain of heavy psych, releasing a staggering amount of music, that includes a whopping seventeen (and counting) full-lengths, numerous EPs, and countless singles and splits. White Hills dwell in a space that fits somewhere between grimy, Detroit-style, The Stooges-rock, and spaced-the-fuck-out Hawkwind vibes, all the while adding their own unique take to the sonic concoctions.

Their latest, The Revenge Of Heads On Fire, featuring a reexamination of six songs from their 2007 release Heads On Fire, both titles allegedly touching on an ancient Viking myth, plus five more psychedelic-rock freak-outs, and cosmic meanderings, is a vast sonic journey, which isn’t too far removed from what White Hills has proffered on past releases.

Opener, The Instrumental Head, is both a swirling, psych trip-out, and a riff-y, garage basher, featuring some nice shred from Dave W, as well as some nice drumming from Bob Bellomo,all before Sensation’s rumbling, fuzzed-out bass announces the opening chords of Radiate, one of the songs rediscovered from Heads On Fire. Radiate isn’t altogether different from the original, although it’s obviously presented in a different context, in a different time. Radiate is swirling, garage- y, head trip, complete with rolling drums, and Dave W’s tripped-out shred.

Inoke Tupo follows, a morass of psychedelic effects, and soundscapes, that acts as a segue into Oceans Of Sound, another song from Heads On Fire that boasts some thick, extra- fuzzy, riffage. Oceans Of Sound is heavy, garage psych done right. Trippy, and catchy it’s one of the standout cuts on The Revenge Of Heads On Fire. Elsewhere, Is This The Road, is a creepy, crawling, slow-burn that features all sorts of dark, unsettling guitar noise, and squalls from Dave W and another standout, bash-fest on the drums by Bellomo.

Like its predecessor, the centerpiece of The Revenge Of Heads On Fire, is the twenty-plus-minute epic Don’t Be Afraid. An ominous, creepy, foreboding sonic descent into all sorts of dark madness, featuring swirling sounds, repetitive, hypnotic rhythm, and Dave W’sethereal, ghostly vocals, repeatedly imploring the listener ‘Don’t be afraid’. This track is truly trance-inducing, as well as offering all sorts of new sonic discoveries upon each listen.

Visions Of The Past Present And Future, featuring a riff and tempo that certainly shares some cosmic DNA from Hawkwind’s Brainstrom, and I mean that in the best of ways. This is a driving, riff-y, bash-fest that also includes all sorts of swirling trippy-ness, layered over the proceedings. As well, the mid-section breakdown is killer, featuring great rhythmic action from both Sensation and Bellomo, allowing Dave W to freak-the-fuck out on his guitar, engaging in all sorts of histrionics.

Silent Violence follows the same approach, if not being much murkier, and bathed in effects. Dave W’s guitar riff, and effects are top notch here, as well as his psychedelic shred. Both Visions Of The Past Present And Future, excluding the epic, mid-section/breakdown, and Silent Violence are killer, late-album, heavy, catchy garage-esque rockers, that are sequenced great, offering a bit of a reprieve following the madness that is Don’t Be Afraid.

We close with the up-tempo, rocking, straight-forward, for White Hills anyway, rocker Eternity. Certainly, the song that offers the most BPMs on the record, it’s a great closer, featuring everything that White Hills is known for, and acting like a sonic exclamation point to The Revenge Of Heads On Fire.

White Hills, despite releasing an album featuring some songs the band has already released, once again show that they are the very definition of ‘heavy psych’, and most certainly one of the absolute godfathers (and mothers) of the genre. The Revenge Of Heads On Fire is, not surprisingly, an excellent, and quite frankly, a jaw-dropping exercise in heavy psychedelic rock & roll, delivered by longtime veterans of this genre. If one is looking for heavy, fuzzy guitars, out-there vocals, unsettling guitar squalls, and overall weirdness coupled with a slightly smoldering darkness, The Revenge Of The Heads On Fire will check all your boxes and then some. 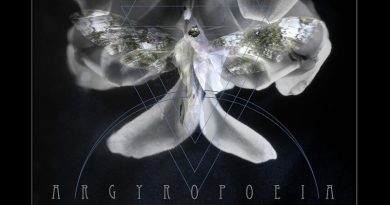 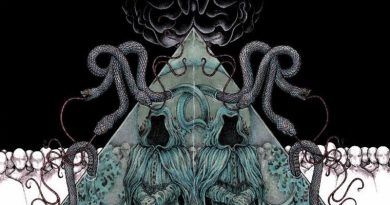 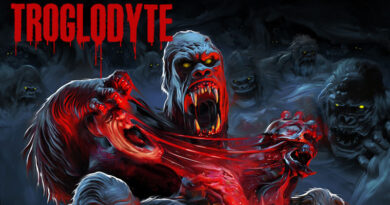