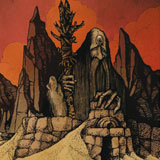 Well, actually, if you didn’t manage to show up at the tiny Stage01 (a.k.a. the Bat Cave) around an hour before Liverpudlian sludge behemoths Conan even set up their amps on the Friday night at Roadburn 2012, then there’s pretty much zero chance you glimpsed or even heard a note of many loyal punters’ most eagerly anticipated act of the weekend. Hell, I tried to be there, but it was simply impossible. I even remember shouting a desperate “good luck” toward the band’s guitarist Jon Davis as he tried to barge his way through the throngs, guitar-head in hand, towards the stage to play. Comparing ‘Conan Live at Roadburn 2012’ to a Foo Fighters at Reading 1995 or Pearl Jam at Roskilde 2000 is a bit far-fetched on a great number of dimensions, but it did feel as though there were sadly never going to be enough deliciously apocalyptic noisescapes to go around everyone. This deafening ‘Mount Wrath’ release hence goes a good way towards balancing supply for that demand, whilst flattening your eardrums, your sinuses and your neighbour’s living room wall in the process.

It says a lot that on that cold Friday in Tilburg, it seemed that roughly 10% of all people on the festival site were wearing a Conan t-shirt. Indeed when you realise that this formidable act sells out on their merch via pre-sales alone, it’s obvious that there must be something lurking in the murky Merseysiders’ sound that’s in serious breach of the status quo. Add to that a personal invitation to open up for Sleep in Oslo and it’s no real wonder that expectations for their first major European show were sky high. Conan performances simply go beyond the Neanderthal interpretations of the word “heavy” and slip into a realm and a darkness all of the own design. The only torches of guidance in these six sombre, vinyl-stamped horizon-crushers are, as ever, Davis’ ghostly wail and Tony Robert’s outstanding ability to depict their walls of sonic mesmerism in visual form via his eerie, almost cartoon-like, landscape cover artwork. Couple all that fever-pitched hype with a muddy, cackling production quality and the quirky imperfections of a classic band performance and you’ve essentially got a beautifully packaged live album which still manages to retain the fan-level feel and excitement of an old school bootleg concert recording.

The band themselves choose wisely when it came to the setlist. Instead of bulldozing the sardined-in crowd from the off with shorter, plundering new material from the majestic 2012 ‘Monnos’ release, they opt to bookend the hour with ‘Krull’ and ‘Sea Lord’; two 10-minute-plus cuts from 2009’s ‘Horseback Battle Hammer’ LP. This is dense, purist, patient doom in its most primitive and devastating form. Davis’ almost Sunn0)))-like riffs marry with Paul O’Neil’s slug-on-heroin drum hits and Phil Coumbe’s bassy snarl to set up a brooding atmosphere within a room which was no-doubt as humid as it was enthralled. ‘Krull’ acts as the anaesthetic before the metallic injection as Davis’ outer-galactic cries hit us gently at around the 5-minute mark, numbing and soothing despite the butchering volume. As the feedback intensifies, you realise just how close you are to the outer limits of what constitutes sludge metal; only Drone overlooking your shoulder with a wry smile. With the listener’s senses numbed by the rumble of the mountain troll, Conan sense the time to strike and plough into the comparatively turbo-charged bullets of ‘Satsumo’ and ‘Hawk as Weapon’.

The change of ‘Satsumo’s pace hits like a sledgehammer as Davis and Coumbe break out into a trademark drop-F-tuned chug and sway against O’Neil’s cymbal cracks like some great grandfather clock pendulum. ‘Hawk as Weapon’ is as evil-summoning a doom riff as you’ll come across from anyone the world over and provides a more accessible few minutes for the crowd to no doubt get stuck into a headbang. Coumbe and Davis lock themselves into a foreground-vs-background vocal dynamic in-between their E-string punishing blows, harnessing the power of both brutality and melody together.

‘Battle in the Swamp’ flexes between racing rhythms and bleak pastures of torrid, bass-driven marshland. You can feel the attention being poured into the playing intensity as O’Neil rolls his barbaric troops through a tempo which sits somewhere in the abyss between Kylesa and Monarch. The ‘Headless Hunter’ also arrives, almost as a ghostly premonition eluding to the immanence of what turned out to be a 2-hour Dopesmoking demolition by Sleep the following night on the main stage – all growl, thunderous toms and the slow scraping of picks on icy cold steel. By the time ‘Sea Lord’ kicks in, all the world’s optimism has been crushed, swallowed and abandoned in a smouldering pile at the very top of Mount Wrath itself. Yet, somehow, the climb down is more skyward-facing than the ascent of ‘Krull’: Davis’ voice trails up at the end of his solemn wailed sentences as Coumbe and O’Neil plod us away from the ghouls and firestorms they left behind at the summit.

And hence with a polite, rippling applause, Conan complete their scaling of their first Roadburn mountain. The muddy amp vibrations rescind and the room’s four walls once again stand upright. I’d be lying if I said that the quality of the sound experience of ‘Mount Wrath’ for me captures the intrigue, weight and sheer sense of dread of either ‘Horseback Battle Hammer’ or ‘Monnos’. So if you’re looking to get into what’s perhaps the heaviest band the UK has produced in decades, do go pick those studio records up too. But yet, ‘Live at Roadburn’ captures a far more nostalgic essence of being the defining show in Conan’s career to date, one that neither they nor the lucky few who braved the swollen crowds are likely to forget any time soon.