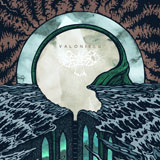 The orange pazuzu spread casts a dark strange shadow over us all standing beneath it. The cosmic coloured demon wings produces a strong wind blowing all our minds. No I’m not having a psychotic episode I’m just describing this Finnish group with some help from their biography.

If you have a couple of riffs, let’s say two or three and they’re really amazing and even better combined, then why need any more to make a song? This might sound boring and repetitive but when it works it just works. The title track ‘Vino Verso’ is just that and it’s a great song that puts you in a trance like state just like a good drone track would do.

All the six songs on ‘Valonielu’ are very different from each other so it’s extremely hard to describe it as it is so versatile. They’re described as psychedelic black metal and sure, I can hear that but I’ll just put a dark in front of psychedelic as its no hippie psychedelic inspirations here but a different darker Ill willing and made by electronic noises and effects. I had the pleasure of seeing them perform live and the amount of pedals on the stage floor was staggering. It was a gig I won’t forget!

Some may find it annoying to not be able to understand lyrics or even names of songs and trying to figure words out is no use as Finnish is quite a special language but in this case I believe it’s better to not understand and not even try to understand. Just let the vocals become another instrument and leave it at that.

‘Valonielu’ is the third full length album. After being dropped from Spinefarm Records they got picked up by Svart Records. Their debut album ‘Muukalainen Puhuu’ was released by Violent Journey Records in April 2009. A year later a split album with Candy Cane was released through a co-operation of the two labels Firebox and Verdura Records. Their second full length album ‘Kosmonument’ came in 2011 released by Spinefarm Records.

I guess Oranssi Pazuzu could be placed in the industrial metal category as there are much electronic noises and sounds entwined in the music but Oranssi Pazuzu are in no way an industrial influenced band but just uses electronic equipment in their music. I think it’s important to point that out. Black metal bands using synthesizers isn’t very popular with the “trve” black metal fans but it doesn’t get more true than this in my opinion.

This is complicated music and simple at the same time. It grows on you every time you listen and brings forth a mood that I haven’t experienced through black metal before. It’s mysterious and creepy and it gives that weird feeling like you don’t know what the hell is going on. That’s some of the charm with Oranssi Pazuzu, you haven’t got a clue what to feel but you know you like it.

The pace is quite slow and it doesn’t get faster than mid-tempo so no blasting or ultra-fast chaotic black metal to be found here. It still doesn’t lose any of the energy that black metal should have, it’s just reflected in a different way. Dark psychedelic progressive trance black metal is my personal stamp on Oranssi Pazuzu and everyone experiences them in different ways. You make up your own.

Even though this is very new and unique, some songs bring me back to the good old 90’s when you still got goose bumps from good black metal and song number five ‘Olen Aukaissut Uuden Silmän‘ which translated means ‘I Have Opened A New Eye’ are a perfect example of that. Even the guitars sounds like they’re taken directly from an old school cult record. Then just add some weirdness to it and I’m sold.

There are many instrumental interludes throughout the record and some ritualistic sounding parts with different kinds of percussion and guitars with the electronic vibes on top. A song can start as a calm ambient piece but that calmness is just the calm before the storm and it bursts out in heavily distorted guitar and high pitch black metal screeching in the Finnish tongue.