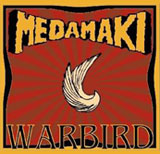 “Hello Evesham, you guys rock!!!” Hmmm, it doesn’t really have much of a ring to it does it? I can’t really imagine these words falling from the lips of Steven Tyler, James Hetfield, Bono or Bruce Springsteen. The very name Evesham brings to mind old ladies sitting round in cardigans and pearls making jam and flower arranging and certainly not the kind of place you’d find a pulsating metal monster like Medamaki. Not that it’s all bad in these sleepy parts, there is a rock heritage here that can’t be ignored, at least 50% of The Sontaran Experiment call Evesham home as did Medulla Nocte I believe (correct me if I’m wrong) and, of course, let’s not forget the mighty glam rock 80s warlords Wrathchild…actually, yeah, let’s forget them!!!

The five guys of Medamaki have given up on local practices like cow touching and cheese rolling for long enough to lay down this four tracker for the Fury 76 label and a very fine, if slightly flawed offering it is too. “Mouth of God”creeps in hesitantly before baring its teeth and puffing out its chest with an enormous chorus (try saying that drunk) which displays frontman Max’s gutsy roar to excellent effect. Once it gets going there is no let up to this song, it’s the musical equivalent to a sock full of snooker balls round the head.

There’s no let up in pace with track two, “Solar Plexus”. I don’t know if the band will like this but I detect a slight Black Stone Cherry vibe in the headlong grooves. Drummer Doug shines on this track, particularly when it breaks down to an awesome drum/cowbell led jam in the middle that Carlos Santana would be proud of, and let’s face it, he hasn’t done much to be proud of in a while!!!

“Warbird” cheekily steals the riff from Thin Lizzy’s “Chinatown” and recycles it as another fine slice of boogie metal. Check out the hungover and sweaty video for this tune on Youtube, also included on the CD as a bonus feature. Final track “Poison the Well” is probably the weakest tune here but still charges along in an amphetamine fuelled haze sticking a size twelve hobnail up the sphincter.

Musically these boys can’t be faulted, their blend of 70’s riffage given a modern metal makeover brings to mind bands such as Orange Goblin and Black Label Society and the songwriting and playing is second to none. If I have one minor criticism it’s that the production lets things down slightly. I’ve been lucky enough to catch these guys live a few times and this release fails to match the sheer juggernaut-on-the-loose power of their live sound; the guitars lack their usual weight, the bass hasn’t quite grown enough hair on its balls and at times it sounds as though Doug is beating the seven bells out of yoghurt pot instead of a snare. The overall mix leans a little too heavily towards the vocals leaving some of the music sounding a little emasculated. This is something the band are aware of and plan to rectify on their next release (this recording has been around for a while now). Production aside the songs are more than strong enough to carry this release. My good lady on hearing this declared it to be “shit”, this coming from a fan of Britney, Kylie and Madonna should be the greatest accolade any self respecting metal band could wish for and enough to recommend it!!!

This is available now from the Fury 76 website and a release date in the shops is imminent…apparently!!!