I took up the offer to review this album with great curiosity, as I think I’ve managed to miss Senyawa a couple of times in Bristol despite much hype and chatter. The prospect of a different kind of heavy and huge handbuilt bamboo instruments always sounded promising but there’s always something that you don’t get yourself to. I also caught Avon Terror Corps’ recent announcement of a double cassette release of this album, plus a live show from 2015 and a set of remixes by ATC affiliates, which shows an interesting will to collaborate and cross boundaries. Knowing then that this was something different, and that people had found something of great interest in Senyawa’s music, I pressed play with no other context.

Alkisah starts with a declarative introduction, the sound is immediately ‘other’. Alongside the voice, a rhythmic device is introduced of what could be trance pads, or an unfamiliar instrument. This sets the momentum, matched to a clatter of percussion and driving urgency with the voice in a story-telling/proclaiming mode. Throughout the album there is a range of vocal styles or sounds, and chosen with clear intent.

At first listen I was thinking about whether the effect of this differs if we know what the voice is saying, when meaning comes through rather than ‘voice as instrument’. Looking more closely I found there were ‘meanings’ provided alongside the sound files. It’s not clear whether, or in what form, this might be presented alongside the album release, but without giving too much away, the brief notes about each song reveal a cohesive story across the album, of a society responding to catastrophe and falling back into destructive patterns. The music certainly makes sense with that context in mind, even without a sense of what each voice is saying.

Tension is held, throughout the opening the question in my mind is ‘When and which way is it going to break?’ as it seems the music could erupt into ferocious thrash, or killer techno at any moment. Discussing Alkisah you might find yourself talking about ‘rawness’ as we often do when trying to describe music that doesn’t fit our prevailing assumptions, but listening closer the sound design is careful, elements in the mix panning and given space, entering and retreating as in some of the best-produced electronic music (my point of reference is Future Sound Of London, or GNOD, like on Infinity Machines).

an album of great power, made by musicians of skill and inventiveness…

This skilful production works alongside a sense of accidental fusion, self-built instruments working alongside the designed elements and challenging any laziness to think of this as somehow ‘primitive’ music. If we think of it as broadly ‘heavy music’, as Senyawa seem to have been positioned in the UK, there is equally a challenge to what sounds are ‘allowed’ in the context of the ‘heavy’.

There are promises of familiar riffing, and tones that sidle up to the expected distorted guitar sound, and epic passages of superb vocal performance that teeter on the edge of familiarity, but these are often undercut by a burst of unfamiliar percussion across the beat, or an uneasy static sizzle that overlays the chug and swells into the sound of running water. In some ways this also fits more readily in a context of drone and similar – all drawn-out tension-building and waiting for release.

After a few listens I’m not sure I’ve really fully digested Alkisah, and as to how it stands in the context of their other work, that’s for another day. I do know however that this is an album of great power, made by musicians of skill and inventiveness, and next time they roll through town I’ll not be so lazy about getting out of the house. 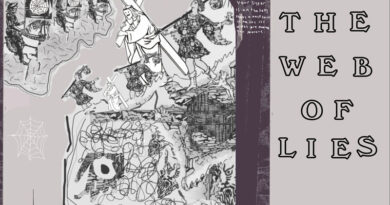 Review: The Web Of Lies ‘Nude With Demon’