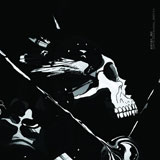 The underground can be a lonely and difficult place to be if nobody knows who you are. Especially if you’d finished recording an album’s worth of material to release into the wider world, but you have no audience to release it to. For reasons that social media can’t explain, upon researching LowFlyingHawks, nobody except press and insiders seems to have heard of them. You could even claim their name as an analogy, that the hawks are so low-flying they’re buried ten feet underneath concrete, judging by how underground they appear to be. A curious case even more so when you realise they were snapped up by the esteemed Magnetic Eye Records, just as a full independent release seemed imminent. It wouldn’t mean much to say that the project is largely composed by two undeniably talented Mexican multi-instrumentalists, known only by the pseudonyms EHA and AAL. But start talking about Toshi Kasai, who’s produced records for Big Business, being behind the desk, and Dale Crover and Trevor Dunn, whose resumes comprise of three of modern music history’s most influential bands in Melvins, Mr. Bungle and Nirvana, all helping to realise this project, then some substantial weight gets behind it.

So what has their combined ability and expertise helped to shape? The initial impression from highly-downtuned bass and a series of drum rolls, bringing in what sounds like an infomercial about snake bites in the opening 50 seconds, doesn’t scream killer. But you introduce those titanic chords of Now Apocalypse, and the atmospherically stirring doom movement here serves as somewhat of an accurate measurement of magnitude for the incredible music to come. In an unusual break from doom archetypes, vocals remain mostly clean throughout and are so heavily sodden with reverb, they may as well have been recorded in a chasm leading to the abyss. The overlay of guitar as melancholic ambience makes each of the other notes built to crush, feel far more intense, but still inducing that cathartic haze that makes doom so tantalising. Follow-up Seafloor Fathoms weaves violin into the fabric of the soundscape, but also picks the pace up with a more animated drum performance. The touch of strings really enhances that dense but ultimately sombre tone, as vocals stretch further towards an impassioned agony without becoming overbearing. Fading Sun takes a step backwards to draw more on the ambience at first, impressively harmonising subtle tortured screams with the clean vocals in the process. But words are switched for a staggeringly heavy distortion wall from a second guitar halfway in, showcasing their shoegaze influences in a far greater light, and making it feel if the gravity of a literal fading sun is broadcasting into your living room.

Immersion breaks for a brief moment as White Temple plays out, a second infomercial style interlude far more suited to the music unravelling before you, before the pace picks back up and a far more sludge-orientated passage of misery you are set to tread. There certainly feels a nod to the two Melvins men here, whose documented influence on sludge remains unparalleled. The screams gain a greater prominence in this track but still don’t impose upon or detract anything from the now intoxicating atmospheric foundation, that everything before has built upon.

Which leads us to Ruins. Kokkai before it spends fifty odd seconds building up tension with drum rolls shifting in volume and speed, and those same lower bass tones at the album’s inset, but LowFlyingHawks hold nothing back as soaring shrill guitar tones, and gigantic bass tones eclipse the foundations they were built upon. The reverb on the vocals here, more so than before, usher in a mesmerising drone, when paired with the outstated wails emanating from the guitar, meld into a simply unforgettable trance. Where doom more often than not can feel suffocating, vocals certainly feel they have so much room to breathe here, and reach dextrous new heights. Everything culminates in bringing out the best of what these musicians are capable of.

Wolves Within Wolves follows a tremendous moment, by the cries from the lead guitar, opening the floodgates for the wall of sound, though slowly seeping in a more optimistic tone, even if the increment is miniscule. This slight change does bring about something unforeseen on Kofuku. A glimmer of tranquillity, with only guitar and omnipresent bass notes left to fill the void between noise and silence. The moment is long enough to introduce another unexpected change: a crunchy, drowned in distortion guitar riff, which had been entirely absent before. It seems like it flicks a switch to continue in an unfathomably heavy hard rock fashion for a short while, just as reality returns and the sorrow crawls back inside. A stark contrast to the curious thirty seconds of double bass descending against total calm, into album climax Destruction Complete. Another interlude stops you in your tracks before leaving you to settle with eleven minutes of doom, blended with absolutely everything that came before it. Ambience to entrance. A mellowed sludge tide. Vocals that echo through the Earth’s very core. A slowed hard rock power trip. A mourning to envelop but also enjoy. The elements altogether make the title of Destruction Complete, all the more poignant.

In Japanese, Kofuku means to surrender, and in the scheme of LowFlyingHawks’ agenda to submerge listeners in an ocean of masterfully progressive, but deeply emotive music, it makes complete sense. Every track evolves upon the next, as if celebrating the traits of its ancestors and making its own mark on the landscape, building upon each like the waves of a storm. And every passing current is worth surrendering to.

Why the chemistry of these musicians has flown so low below the radar is bizarre, but the premise of premier-standard doom metal will elevate them soon before long. A cataclysmically good album.