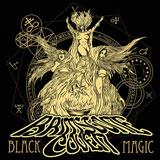 Brimstone Coven are the essence of 70s doom. When doom wasn’t quite a thing, it was more occult rock shot through with a smoky, sepulchral haze. West Virginian sons, and only together for four short years, Brimstone Coven bring forth that hazy 60s and 70s vibe to their bluesy rock and roll. It’s utterly infectious, and their new record is out via Metal Blade now!

The opening title track has this insatiable groove, summoning the spirits of early Sabbath, a dash of Witchcraft and the kind of blues that you can feel deep within. You can also feel that Appalachian darkness seeping through each whiskey soaked riff, and each soulful vocal part. There’s a slightly rawer Led Zeppelin influence lurking in the urgent Black Unicorn and the jagged, almost Western vibe of Beyond The Astral.

The acoustics of As We Fall provides a poignant break in the rock and roll, where Brimstone Coven becomes an almost evil Eagles cover band. When the soulful solo kicks in, you become enraptured in this moment of rock simplicity. It is a piece of awesome 70s music, captured in modern times. Black Magic is an authentic sounding album, lacking the clarity of more modern ‘occult rock’ bands, and creating a truly vintage feel about the record. If you told me that The Plague was when Simon and Garfunkel started listening to Pentagram, I’d believe it. It captures a moment in time perfectly.

The soaring Zeppelin influence rears its head again on the proggy Upon The Mountain, which also grows into a Sabbathian groove. The super catchy swagger of Slow Death is an instant hit, especially with the bluesy bassline that kicks in later in the song and just adds to it perfectly. The whole of Black Magic encapsulates the good things to come out of the occult rock phase. You wouldn’t find higher quality occult doom if you looked all year.

Black Magic impresses at every turn. From up tempo rockers to gloomy acoustics, an omnipresent fog hangs over everything, smothering each well-crafted song into a melancholy ode to the misty mountains. By the time the grinding The Eldest Tree comes to an end, Brimstone Coven have taken you on a journey through hazy 60s/70 psychedelic occultism, all the time keeping the guitar front and centre. Hypnotic, addictive and gloriously retro, Black Magic stands tall against all occult doom releases of the past few years.