There is a lot to be said about momentum in music, and Australian old school loving throwback death metal band Werewolves certainly know a thing or two about that; not only in terms of the blistering pace found on their stellar releases since forming in 2018 but also in the relentless productivity in which they have been dished out. Making their debut with The Dead Are Screaming in 2019, they first came to my attention with follow up What A Time To Be Alive, a delicious piece of retro influenced violence with enough sprinklings of modern awareness to raise the bar beyond the run of the mill.

The band kicked off the year with the appropriately named Deathmetal limited EP just as war broke out in Europe, now they have arrived at the mid-point with their third full length offering in as many years From The Cave To The Grave that’s out now on Prosthetic Records.

Whilst each release is seemingly heralded by layers of catastrophe in the real world, the band have retained a gleefully nihilistic and curmudgeonly approach which lends an endearing character to the brutal assault.

Armed with no shortage of confidence and blessed with a sense of humour that stands them apart from some of their more po-faced peers, this latest album takes the foundations they’ve crafted and simply sets fire to them in a manner befitting the apocalyptic bushfires that have ravaged their native country.

Once again as subtle as a Russian tank converging on Ukraine, Werewolves waste absolutely no time getting down to business with opening track, the winkingly titled Self-Help Book Burning. With all the information you need to know right there after the de rigueur opening sample, they launch into the meat of the matter with a succinct ‘Fuck you, fuck you, fuck you’. Machine gun drumming underpins the ominous Slayer like build before the band barrel off into furious death metal territory.

Violent clashing vocals and chord progressions occasionally break out into grooves that add respite and hook filled moments despite the band’s commitment to creating an absolute hailstorm of decimation. In spite of their instincts, they manage to introduce elements of melody into the cacophony and the final slow down sees them break out into a monstrous chug.

We Are Better Than You tries for restraint to set the scene, but you can hear the band strain at the leash before the Obituary meets Carcass charge. Drummer Dave Haley hits the kit so hard and fast you can almost picture it smoking in the recording studio as they thrash through the sub four-minute track. Awash with statements of intent and not to mention the creative use of the word ‘fuckwit’ in the lyrics, before concluding with another expletive ridden sample, this time Alan Ford’s fantastic Brick Top character from the movie Snatch.

All The Better To Eat You With and Crushing Heaven’s Mandate offer up another pair of churning ragers that double down on their ‘fuck everything’ mantra and approach to making music. Having taken umbrage at people daring suggest an element of technicality in previous releases, the band have seemingly embraced the ethos of trying to out Slayer the departed thrash titans. Remaining steadfast in their musical approach and force feeding the listener on a diet of Hate Eternal in a blender with blackened elements to wash the taste down.

Harvest Of The Skulls however is a moody smouldering atmospheric track in the heart of the album. Sam Bean snarls in multi-layered effects over a mid-paced, but no less unrelenting double bass. The track feels a little like Dead Skin Mask on steroids and dances around the slower tempo showing off Werewolves’ undeniable skills, revealing a sonic palette far wider than they would probably admit. Making a dramatic impact after four face biting numbers, this feels like the soundtrack to making lampshades out of human skin.

After such a ballad like affair, the band get back to the business of putting your head in a vice and squeezing. Oedpidus Tryrannus might not start off with the highest beats per minute on the album and contains a few more moments of accessible riffing, but as it begins to canter up to the climax, the pounding becomes harder to nail down in a straight line as they swing wildly back and forth into the black metal hum and almost shuffling grindcore pummelling like Matt Willcock was in the midst of a Ritalin binge when he wrote the riffs.

Nuclear Family Holocaust and Pride And Extreme Prejudice are two choppy, neck snapping pieces of classic Werewolves. The former never settles on one style as it bobs and weaves like a boxer constantly trying to keep you guessing which way they will feint, before landing a savage combination, whereas the former dispenses with any such trickery and just goes all out to the rip the listener with speed. Even when they try to slow down, it still whips by in a blur.

Concluding with Watch Your Mouth, they finish with the strongest offering on the back half of the album, almost chanting at times, with nods to some of the more open dynamics that have gone before. Even the slower, whispered moments drip with menace as they turn the screw and the band go full tilt on the final straight, then leave without a sample, just silence as their exclamation point.

From Cave To The Grave is less progressive than the previous release, which according to the press statement surrounding it, was a very deliberate choice, but makes the album no lesser for it. Once again, the band have whipped themselves into frothing misanthropic and vomited out an album that aims to please no one but themselves and their mission statement. However, you won’t be disappointed. 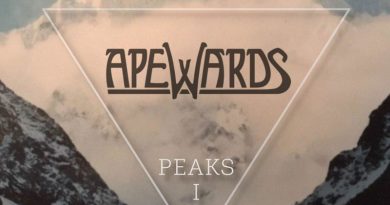