I had the opportunity to review postcards from new zealand’s last album burn, witch, burn. I didn’t give it a great review, not because it was bad, but because it wasn’t something I’d find myself listening to much. I branched out from my normal post-rock, psychedelic music and took a chance. The band was appreciative of the review regardless and hinted towards a new album that is taking an entirely different approach. I was intrigued.

nin-an-ak is part two following burn, witch, burn in the genre crushing trilogy betwixt and between. The opening silence of e-ana is a complete 180 from the powerful blasts beginning burn, witch, burn. Distance noise becomes closer and unsettling. Anticipation for a grand entrance of explosive music is present but isn’t quite fulfilled. postcards from new zealand have a story to tell and they are just setting the scene for part two.

The droning background and soothing acoustic riff is pleasant to the ears again and inana picks up where e-ana left off. Almost immediately we hear a contrast with a perfectly distorted guitar. It may seem random but the well-timed rhythm creates a balance between tension and relief. The song builds over the ten minutes, slowly adding layers along the way.

The beauty of this album is the intensity gradually rises with each song as halfway through is╠îtar we have left soothing clean guitars in the dust and the distorted guitars take the spotlight. The broken amp fuzz tone fills the airspace and leaving chills in its wake. Towards the end there is an epic palm muted riff that carries the song along, the tempo and intensity eventually slows down as violins, and maybe a cello, play beautifully over the top.

ninsianna brings the listener back to a calmer beginning. Silence again with a distant noise fading in. The drums keep the pace with a steady beat in the background as the droning becomes more prevalent. The guitars yet again kick in becoming the focus while building the excitement for the grand conclusion.

And grand conclusion it is. nin-ana is absolutely fantastic. It starts with an outstanding drum beat, followed shortly by a fuzz soaked wall of sound. The song breaks into a very catchy and groovy riff that caught me off guard. It’s definitely a favorite track as the song brings back all the elements from previous offerings by overlaying a beautiful orchestra atop of the chaos and it sounds unbelievably great! The chaos abruptly stops leaving the beauty of the strings to calmly close part two of this series.

I was unfair to postcards of new zealand with my last review. I had only heard burn, witch, burn and although it’s not my favorite, it shows how incredible these musicians are. To put out such an aggressive album followed by the beautiful work of art of nin-an-ak leaves me in awe of what’s to come. I seriously look forward to part three. 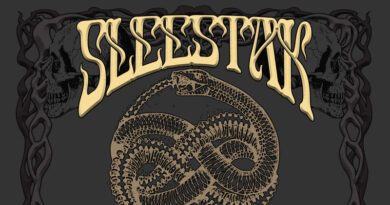