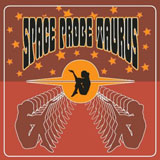 Way back in the mists of time before Dave Wyndorf discovered biker chic, arena rock and, more recently, the key to the pie cupboard, Monster Magnet released “Spine of God”. This was a proto stoner classic that blended the avant punk fury of MC5 and the Stooges, Mudhoney’s psych grunge, Hawkwind’s tripped out sonic attack and Sabbath’s prime riffery. Listening to this offering from Space Probe Taurus you’d be forgiven for thinking you had stumbled across the tapes for some long lost follow up to “Spine of God” as these buzzed up Swedes have pretty much nailed the early Monster Magnet sound.

Now, you may be thinking “if it sounds like Monster Magnet I’ll just go and listen to them instead”. Yeah, maybe you’re right, but taken on its own terms this album is a bit of a speedball classic. Each track bristles with an energy and excitement that so much “stoner” rock fails to match these days. In fact this is a relentless and remorseless assault from start to finish, each song hitting a peak flow of amphetamine fuelled grit. The only respite here are the brief pauses between songs to catch your breath before the next wave of rock and roll mentalism breaks overhead. Slow is not a word these guys seem to know, they must each lose half a stone when they play live and just listening to this album in the privacy of your own home is enough to break a sweat. There isn’t much to distinguish one track from another here as each follows a similar path but if the intent is to slay the senses with a barrage of buzzed up riffs and psychotic drumming then job done. Drugs may not be good for you but they sure do inspire some great music!!!

SPT have created an album of such intensity that it could have come wrecking out of Detroit in 1969 instead of the land of the midnight sun today. Buzzville Records may not sign the most original bands on the planet by holy fuck do they make up for it by uncovering some righteous rock and roll. Put your doom and sludge albums in a darkened cupboard for a couple of days and get yourself some psyched up, souled out, fuzzball punked up unholy vibes…it’s good for the mind, body and soul…hallelujah brothers and sisters!!!