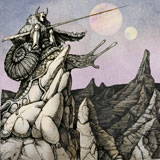 Two giants lock horns on this new split release by Head of Crom Records. Conan and Slomatics are a formidable force in their own right let alone allowing for the conurbation of bands on one split. The reputation of both bands many will already know. This has to be therefore, the heaviest clash of the titans split ever to be released. Another important aspect to this is the record cover itself. Covers should always be an important part of the release because they are the face by which one can sometimes judge the music contained therein. This is certainly one of my favourite covers for a very long time. Depicting a warrior astride a snail on a high range of mountaintops made me draw an immediate comparison with Hawkwind’s Warrior on the Edge of Time. As a pictorial metaphor for heaviness no other image can surely surpass the message: what you are about to listen to will be magnificently HUGE.

First up onto the battlements we have Conan. With their barbarian stride, sporting gold gilded animal hair lined loincloths, broadswords the size of mountains, and a heaviness that few can imagine in part prepares you for the oncoming slaughter. The monstrosity of tone produced by Jon and crew takes Conan to the next level in their quest for world domination. Conan’s three songs strike like Neptune’s trident into the heart of the village, it lays the land low with the strength of a tsunami surge.

Compared to their album we find them returning from their newest raid washed and looking slightly cleaner. I loved their previous album, but in terms of production, although capturing the beast, it also suffered by being coated in bloodied mud. These songs do not suffer from the same fate, guitars, bass and drums re-sound with crystal clarity within the skulls of the vanquished. It maybe me, but Conan’s approach has slightly changed as well, each song concentrates on a single core riff from which they build, illustrating an exciting new development in writing style. For me this really works, and although the songs sound similar, with each merging into the next, the overall effect leaves me totally impressed.

The difference between what Conan and what Slomatics do is indiscernible. Certainly for the CD, the Slomatics tracks almost sound like a continuation of the Conan tracks. This should not be regarded as a criticism though but rather as a real strength. If placed the other way then I would be thinking the opposite way around. Simple. Belfast’s Slomatics also deliver three very similar songs, total heavy seismic vibrations push the band forward with riff laden grooves that make you want to smash your head into the speakers. You just can’t tell there is no bass on their recording since the guitars fill the space more than adequately. Hooks galore the steady tread of a concrete foot making an imprint across clay fields forges the mind into submission. Sounding like a depressive Helmet, from when they were still darlings of early 90s sludge/hardcore, the Slomatics tracks make for compelling listening. Having not actually heard their previous releases this makes me want to gather up their back catalogue as quickly as possible.

The vinyl version of this will be ltd. to 300 copies, if I were you I wouldn’t be hanging about, I anticipate this is going to fly off the shelves. So contact Adam at Head of Crom and order your vinyl copy right now!! I could have taken so many more tracks from both bands. I nevertheless understand the limitations of doing splits and yet the overall purpose has been achieved, leaving me wanting to hear more from both bands. A truly incredible release, credit should not only go to the bands but to the labels Head of Crom and Aurora Borealis for getting these two juggernauts to collide on vinyl as well as CD. Fantastic!!! Bloody marvellous!!! 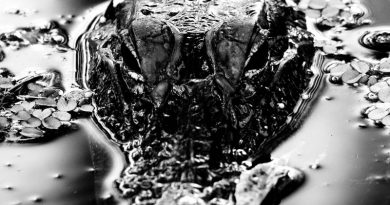 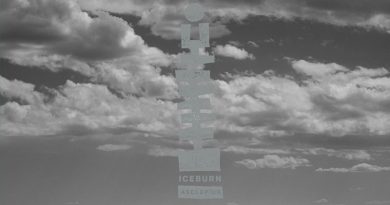