Within this discography you get the Oneric Dirges In Mono and Different Ways To Be Haunted demos, the first and unreleased take of Alone With My Thoughts which features nowhere else in their discography. If that wasn’t enough, we’re treated to a beefed up remastering job and the collective demo art has been fused for this special occasion.

The first two tracks are from Oneric Dirges In Mono and feature Christian Leitch – drums/guitars, Stephen Morrissey – bass and original vocalist Vicky Walters. Opaque lives up to its name, starting with a dense and impenetrable wall of feedback and drone akin to early Earth. Vicky’s deep, morose vocal style melds well with the heavy slabs of down tempo gothic tinged doom metal. Amber is the longest track on the discography at nine and a half minutes, and despite its length, oddly feels a little punchier in comparison to Opaque. This may be due to the addition of more melody with a notable change in tone around the five minute mark, helping to add light to the shade.

Next up is bonus track Alone In My Thoughts which you can find on the 2006 debut album Drawing Down The Sun and is the sound of despair that will carry some appeal to fans of bands such as Warning and Solitude Aeturnus (circa Into The Depths Of Sorrow). In fact the band toured with Warning and share that band’s cathartic need for emotional release. It’s not usual for a doom outfit to turn inwards and focus on the personal as opposed to wizards, horror movies and weed .

Next we have the Different Ways To Be Haunted demo which features the same line-up as before, but with the addition of drummer Jonathon Gibbs, freeing up Christian to focus solely on guitar. A Close Study resembles a far less commercial Lacuna Coil and Vicky does bare a vocal similarity to Cristina Scabbia. While I don’t begrudge Lacuna Coil’s success, I do feel if there was any justice in the world The River would be at that band’s level.

It demonstrates a band who, at this nascent stage, despite the distortion and lumbering riffs were determined to stand out from their contemporaries by injecting melody and emotional depth…

A steady drum beat and feedback kicks off White Library and we’re met with a slab of harmonious melancholy that signifies a musical maturity where The River once again demonstrate there is more about them than heavy sledgehammer drone doom, this track could have fit on their most recent album Vessels Into White Tides. In fact it’s a cut that carries a hint of PJ Harvey’s Dry which one critic stated was ‘a forceful collection of brutally emotional songs’ and this could apply to both the discography and the track itself. Broken Window concludes the album and brings us full circle with layers of early Earth style distortive patterns (I’m thinking Pentastar), but with Vicky’s more expressive and emotive vocals as opposed to Dylan Carlson’s laid back stoned drawl.

This is a fascinating discography that offers us a snapshot of The River‘s history and is a must have for fans. It demonstrates a band who, at this nascent stage, despite the distortion and lumbering riffs were determined to stand out from their contemporaries by injecting melody and emotional depth that one usually doesn’t tend to associate with the doom genre. As much as I adore Saint Vitus, their subject matter doesn’t tend to touch on emotive lyrical themes or take subtle cues from the likes of PJ Harvey. As for the question as to who is the better vocalist Vicky or Jenny, I’ll be diplomatic and say they both perform the material they feature on exceptionally well. 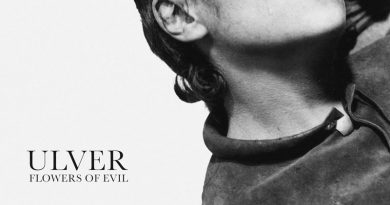