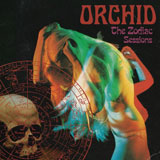 Do you remember Black Sabbath? I don’t mean the new/old reunion that released one of 2013’s best metal records. I mean the classic Sabbath, who with ‘Master Of Reality’ essentially defined doom with every classic element. Orchid remember them. Boy do they remember them…

‘The Zodiac Sessions’ is a remastering of Orchid’s debut EP ‘Through The Devil’s Doorway’ and record ‘Capricorn’ onto one CD, or for vinyl lovers 10″ & LP, with tasty new artwork. First of all, that artwork style is just gorgeous; taking you back to the early 1970s with its psychedelic and occult overtones. But what of the music? ‘Capricorn’ was a critically acclaimed record when it first appeared in 2011, and rightfully so. ‘Eyes Behind The Wall’ is an Ozzy wail away from actually BEING the reincarnation of Sabbath circa 1972. The title track is a throbbing, blues-drenched slice of doom rock, and ‘Black Funeral’ continues the Sabbath worship vibe. It’s a fine line to sound like someone, but not shamelessly ape their sound without originality. Orchid avoid this pitfall by simply writing good songs. ‘Black Funeral’ for example is painfully catchy, and it’s not the only one with a riff or melody that worms its way into your mind, plants a seed and lets it grow. ‘He Who Walks Alone’ is another one that is simple yet memorable.

‘Cosmonaut Of Three’ has a great fuzzy opening riff, and is a bit more expansive and progressive compared with what has come before. It’s a bit more psychedelic and different, which is no bad thing. An entire album of Sabbath tribute would have been a bit tedious after a while, but Orchid uses this track to establish themselves as a more twisted, unique entity. A wise choice. It makes them more than yet another Sabbath clone, it gives them identity.

‘Albatross’ closes the ‘Capricorn’ part of the remaster with a very ‘Planet Caravan’ vibe. There is definitely more of a tendency towards Sabbath worship here than there is on their stunning ‘Mouths Of Madness’ record from last year. On that they evolved into their own band playing their own music in the style of classic doom. On ‘Capricorn’ it veers almost too close to derivative. I still like the record a lot, but they get better the more of their own ideas and style they mix in.

The debut EP stuff is a lot more straightforward, with the hard rocking ‘Into The Sun’ a particular favourite. ‘Eastern Woman’ has a thick main riff that has a great blues swagger. It’s an interesting reference point to see where the band came from. ‘Son Of Misery’ has the groove and psychedelica, with also the first feelings of menace. ‘No One Make A Sound’ is a striding anthem, and it brings the EP to a satisfying end.

Orchid are now a great band. They have become a great band, from a good band that tended to rely on Sabbathisms a little bit too much for their debut. But in no certain terms is that a bad thing. Few bands could play like this and pull it off with vigour and soul. Orchid did that, and ‘The Zodiac Sessions’ is definitely worth a listen. It riffs and grooves hard, sometimes that’s all you need.