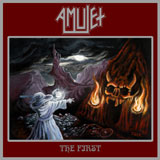 Since the arrival of their none more denim Cut The Crap demo in late 2011, London’s Amulet have made quite a name for themselves with their no nonsense take on heavy metal.

Supporting everyone from Angel Witch to The Sword demonstrated the broad appeal of their simple yet effective sound and has cemented the band as one’s to watch out for. They even have their own mascot ‘The Hangman’ which fittingly sums up the feeling of impending doom when listening to their debut album The First.

People who have being following the band since their inception will see this opus as a natural progression from Cut The Crap with a similarly ferocious approach applied to the full length but with slightly more accomplished song writing. Opener Evil Cathedral shows just how far the band have come with perhaps their best song to date starting off with a thunderous pounding of the drums accompanied by a deadly set of NWOBHM loving riffs.

Although very much heavy metal, Amulet’s sound is much more groove orientated than many of their melody driven competitors. Much of the album’s tracks such as the very British Glint Of A Knife are heavy on the Witchfinder General and can appeal to fans of Trouble just as much as Saxon.

The First is very much an instant impact affair and contains 13 tracks that are largely short in length but leave a lasting impression. Their knack for writing catchy riffs is clearly something that isn’t going to relent any time soon and certain songs like Bloody Night really demonstrate musicians with a genuine love for all things ‘eavy.

These 13 tracks are nicely padded out with two instrumentals, The Flight closing side A and The Talisman opening side B. The former is an eerie keyboard trip which sounds like it’s come from a classic Sega game, whereas The Talisman is a great Pagan Altar worshipping display from guitarists Heathen Steven and the newish Nippy Blackford that proves one of the album’s highlights.

Not every song on the album holds the same amount of strengths and the chug heavy Sacrifice in particular will prove more of an acquired taste to those expecting a pure Accept worship throughout. This is, however, only a minor gripe for a band that are only on their debut.

The artwork for this album is, as with all Amulet art, a really fitting way to round off the album with a powerful display of both good and evil from none other than the band’s bassist Bill Dozer.

Amulet have taken a massive step to becoming England’s underground heavy metal forerunners and as the album title suggests there’s plenty more to come yet. 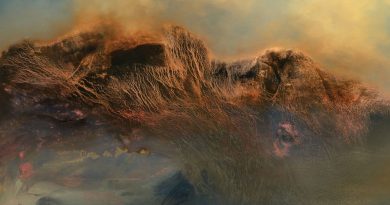