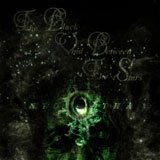 Having been a proponent of Brendan Perry and Lisa Gerrard’s forays into neoclassical dark wave over the course of their 20+ year collective history as Dead Can Dance, hearing Nyogtha‘s ‘The Black Void Between The Stars’ was like a reintroduction to a familiar friend; it’s as if ‘Spleen and Ideal’s sonic doppelgänger, dressed in shoegaze atmospherics and flexing doom/drone muscle decided to drag me on a far, far darker trip. And while Dead Can Dance chose a distinctive Medieval European sound and aesthetic (which would eventually define their identity through most of the 1980s), Nyogtha (also a male/female duo) channels a little Lovecraftian lore in their thematic allusions to the ‘Necronomicon‘. Death, dreams and ‘the ascent through the spheres’ are all one seamless concept where ‘The Black Void Between The Stars‘ could easily be the definitive soundtrack to ‘The Book of Dead Names‘.

Opener ‘The Wailing Woman’ is the ultimate ‘gateway’ into Nyogtha‘s world of formless structure and bleak sonic landscapes; imagine Kevin Shields (My Bloody Valentine) playing a slow motion ‘Loveless’ in reverse and you’ll begin to appreciate the depth and complexity of their sound. Tanith Griffiths handles primary vocal duties throughout the album, and while most of her words are indecipherable, the message of divine ecstatic pain is still clear; just the presence of her voice is like an anvil weight of impending agony, and paired with Edward Radcliffe’s subsonic riffage, they’re truly a force to be reckoned with. To say that this music is ‘spiritual‘ would most certainly be an understatement; mind expansion is the rule, and with a boundless guitar driven aural backdrop that’s equal parts cacophony and melody, there’s really no limit to the trip.

As the duo transitions into follower ‘To Die, Is a Chance To Dream’, they tweak and twist a similar recipe for sonic success, as droning feedback and down tuned rhythms ebb, scream, and flow like a vintage AM broadcast from hell. As you listen, it’s easy to envision yourself trapped and abandoned behind cathedral walls, where reverberation of sound is infinite, and the reality of eternal isolation is clear. The music reminds you just how beautiful ‘letting go‘ (of this tangible reality) can actually be; this is not necessarily a celebration of death, but a celebration of the arcane knowledge death and spiritual release can inevitably bring…heady indeed.

Things take a grisly turn with ‘This Ceaseless Devouring’, where the arrangements focus more on decay and implosion than exploring the stratosphere. The song is a true statement on the disintegration of the soul; the duo reins in the reverb and ups the feedback creating an evolving sense of claustrophobia. Where the emphasis of the ‘Necronomicon‘ is on confronting and conquering malevolent (personal) demons through astral projection, ‘Devouring‘ is an example of the cost of defeat. A raspy black metal vocal style injects itself midway conveying an image of physical and spiritual torture. The immediate impression is the maddening spiral of Khanate’s ‘Too Close Enough To Touch’; a damn impressive feat because Alan Dubin’s (vocals, Khanate) rendition of rabid insanity is pretty tough to match. The album’s lack of percussion works especially well here as the music aims to replicate this shapeless and unnamable ‘devouring’ entity. A lightly picked electric acoustic passage accents one extended drone, anchoring the song in melody. And this contrast is where ‘The Black Void Between The Stars‘ really succeeds; dissonance and melody serve each other like the polarity of light and dark or the necessity of an ultimate evil to counter an ultimate good.

Album finale ‘The Hands of Ruin; Version II’ is a rerecording of the song ‘The Hands of Ruin’ that originally appeared on their 2010 release ‘Hymns To The Astral Planes’; it’s another excellent example of Nyogtha‘s command of the melodic drone-dirge. The track looms like a 200-ton smog, and at just over 12 min (the shortest track by far), it ends just as quickly as it begins. For those addicts craving more (yeah, I’m definitely strung out on this one), check out their bandcamp page which includes the ‘Astral Planes‘ release and 2011’s ‘Origin of I’ for free download.

Four tracks, 68 minutes. Easily one of the best drone albums I’ve heard in some time and a fantastic predictor of things to come. I hope Nyogtha continues to evolve their brew of gothic neoclassical shoegaze because it’s distinctive and they do it damn well. Highly Recommended.