Emerging from the state of Indiana, hard hitting trio Yellowtooth are here to do one thing and that is to deliver huge, raucous heavy metal the way they like it and make no apologies for that. Formed by seasoned veteran Peter Clemens (Invasion, Skullview, Sea of Tranquillity) on bass/vocals joined forces with Ed Kribs (drums, later replaced by Dave Dalton) and Henry McGinnis (guitar/vocals) from Chronic Disorder with the common goal of combining their influences to forge a genre straddling collision of sludge, doom, stoner and thrash wrapped up in the Southern swamp flavours of the region.

Starting out of the gate with From Faith to Flames, the band’s third full length album begins with the rich lazy Southern vibes utilised to great effect by bands associated with the NOLA scene. In a grand opening, the band invite you to pull up a chair and spark a blunt that would make Cypress Hill blush. Multi layered vocals, part Black Label Society, part rasping growl in tone ominously over choppy, blues heavy riffs.

Veering between that laidback, life at their own pace style, the band switch the pace to a churning, slamming groove that acts as a platform for the guitar pyrotechnics of McGinnis. Striking and muscular, the chemistry between the members is tighter than Robert Johnson holding his guitar as the Devil came for his soul.

Atrocity immediately ditches the stoner vibe for a more urgent pace. At times giving a nod to the might of Slayer, the track is a mid-paced, bullish monster that’s underpinned by Clemens’ throbbing bass work allowing the lead guitar to pull you through the maelstrom.

This should take nothing away from the powerful drumming of Dalton, or the savage bark of Clemens though, Yellowtooth seems weighted to play to their strengths. At times the vocals are unfussy and unites the band’s focus, barking their message, but the relative simplicity of their delivery is a foil for the loose, wondering lead guitar that seems to have the job of the expressive heart of the band.

The swirling effects of Deep Space give way to the opening licks of Astronaut’s Journey and Yellowtooth once again returns to that delicious Southern style of jamming blues mixed with a dash of space rock. Dropping into glorious melodies or slamming into passages that drip with grimy sludge, the space journey slowly becomes a nightmare. The suffocating, urgency of the mission juxtaposed with the rolling instrumentals like the spinning, gravity free visions you would experience high above the earth.

Yellowtooth are a celebration of metal, played by people who love and enjoy metal…

Citing influences like Orange Goblin, C.O.C, Clutch and Weedeater, it is no surprise that The Burning Illusion is packed with great dynamics. Clemens’ guides the music with his gruff, commanding voice, never overstaying his position as a narrator and allowing the band to shift effortlessly between styles. The Illusion is a prime example of this with the upbeat tempo given the space to breathe with towering breakdowns and the thunderous intro to Void is double bass heaven that would sit happily alongside a bill featuring High on Fire.

Dead Flowers walks the tightrope between stoner bliss and straight forward driving metal that is prime shout along material that cries out for a front row crowded with sweaty, beer drinking fans banging their heads before McGinnis again ignites for another great solo.

Tender picking and shimmering cymbals over waves of sounds usher in the more stately side of the band on Scattered To The Wind and things get seriously epic for Clemens to stretch his vocals. Mixing clean and mid-range with his rough delivery shows a progressive side to the fierce barrage that makes this one of the albums many highlights.

A classic 80s Megadeth introduction heralds Lazarus Syndrome’s sprit to the finish, with its tales of ‘the walking dead’ and viruses reigning which ends the album in a suitably fitting, apocalyptic and upbeat fashion that has an air of the golden era of thrash about it mixed with filthy sludge. Ending the album on this pure, unadulterated speed rush, The Burning Illusion leaves abruptly in contrast to the way the album began, making the silence jarring and you missing the ride you have been on.

Yellowtooth are a celebration of metal, played by people who love and enjoy metal; it sounds simple, but it’s not. The Burning Illusion is a collision of many ideas that they blend in a way that just works, thanks in large part to the fantastic interplay between the members. This album has simultaneously an old school feel but sounds incredibly fresh and vibrant.

Dalton, who only joined the band just over two years ago has brought a tautness to the band that runs through everything they do and their third album has seen them leap forward in terms of sound and song writing. In short, this album is really good. 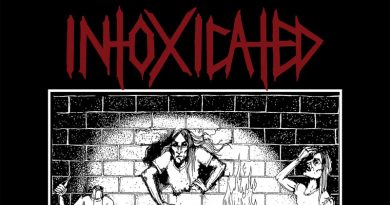 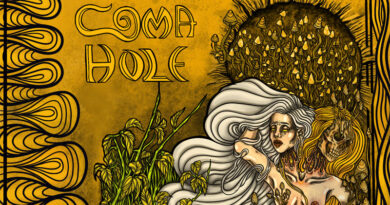