Desert Records has quickly become one of my favorite labels with a constant flow of unique and just awesome music to the point I interviewed the labels founder, and Red Mesa guitarist, Brad Frye as part of our In Search of Tone series. With the recent signing of Doors To No Where, they show no signs of slowing down. Darkness Falls is their first release on the label and will be out May 21st, 2021.

Door To No Where consists of Marc Lewis (guitars/vocals), Pete Testorff (drums), and Marc Prefontaine (bass). The trio are responsible for an epic discography dating back 11 years. They’re often described as stoner rock with a touch of punk influence and for fans of Fu Manchu. Well, that definitely makes sense because their closing title track Darkness Falls features none other than Bob Balch on guitar. As if this riff-filled album couldn’t get better.

I’m a guitarist myself and recently started (attempting) to write my own riffs/songs. Listening to Darkness Falls, I become both inspired and discouraged at the same time. Starting with Lie, Lie, Lie, the explosive riff gets me pumped up and motivated. I immediately want to play guitar. By the time I get to the sixth Who Died? I reach the discouraged stage thinking, I don’t know how I’ll ever make riffs this good. And that’s just over halfway through the album.

As stated above, Lie, Lie, Lie kicks this album off with a bang. A fast pace song throughout that does slow down a little for a very melodic solo only to end strong. It also sets the stage for an album that will take you through a journey of genres and influences.

Clocking in at just over three minutes, Fade is a song that scratches that 90s rock itch. A fantastic palm-muted riff paired with a perfect rhythm section makes it impossible to sit still while listening. When the chorus kicks in and Lewis shows us a little of his powerful vocals, I remember backing it up a few times to let that really soak in.

Darkness Falls has something for everyone, while creating a unique sound to call their own…

You don’t spend too much time in the 90s however. The songs Worship The Machine and Policy (tracks three and five) take you back a few decades. Their slower, simpler riffs transport you to a time when doom metal was founded. Tucked ever so perfectly between these epic songs is a short little punk number titled Got Mine. Its fast-paced tempo carries you through a quick journey of inspiration to the likes of the Bad Brains and abruptly stops as fast as it started.

The time travel through various genres seems to lead up to the following two songs. Who Died? is a perfect blend of 90s rock, punk, and doom. It has an awesome opening riff that’s paired with well-timed drums and is brought back throughout the song. Who Died? transitions nicely into the haunting opening of New Monster that also blends genres in an outstanding way.

The album could end there and I would be content but Doors To No Where know how to elevate what they’ve created. Every song on this album is around the three-minute mark but the band leaves us with almost eight minutes of speechlessness. The vibey guitar intro with thundering drums and slow melodic vocals allow room for the song to build. It drops off at four minutes with an eerie high pitch tone only to explode into an epic guitar riff from Bob Balch. The song carries on weaving between powerful drums, Primus like bass riffs, melodic vocals and more soloing by Bob.

Darkness Falls has something for everyone, while creating a unique sound to call their own. This is an album I have and will continue to have on repeat for some time. I look forward to hearing some live versions of these monstrous songs in the near future! 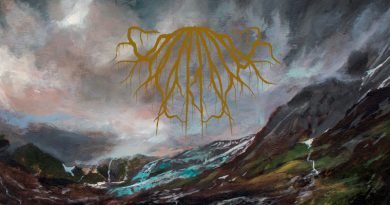