Long-term readers of my reviews will be well acquainted with the prolific world of Gridfailure (David Brenner), less familiar perhaps is Megalophobe (Benjamin Levitt) who has a string of releases to his name, including this, his third collaboration with Gridfailure which follows 2018’s Tasukete and 2017’s Dendritic.

The cover by Brenner himself thematically features the naturalistic tones of his other releases (When The Lights Go Out series, the Chrome Waves split etc), whilst the album’s title alludes to this link yet further. According to Levitt in the promotional notes the album was a long time in the making, so bearing that in mind and without further ado let’s get this review underway.

Tuning For The Inevitable is a mood setting piece of delicious ambient quality featuring some rather tasty and sultry sax, such as you might find on any Signora Ward Records release. Beautiful and harrowing simultaneously, it’s a hell of a way to commence an album. Alterations Of Symbosis is the second longest track on the album at over eight minutes and akin to a guitar-less interpretation of Sunn O)))’s majestic Black One album, fans of the recent Lustmord ‘Tribute’ album The Others should also take note of the sounds produced here. Dark Ambient with an extra side-order of dark, to quote Nigel Tufnell from Spinal Tap ‘how much more black could this be? The answer is none. None more black’.

Remember the film Ghost when the shadowy demons emerge from hell to cart away the spirits of Willie and Carl respectively? That’s what the music on A Cadaveresque Breeze reminds me of. Eerily satisfying and with suitably karmic justice in tow. Bellows with its jazz influences reminds one of Gridfailure‘s prior collaboration with Mac Gollehon on Dismemberment Cabaret as well as Miles Davis’ ‘electric period’. The sense of dread that the track evokes makes for a perfect soundtrack to a Lynchian nightmare.

Something Foul thankfully only references the track’s theme and vibe, not the actual sound. Disturbingly shrieked vocals that conjure the spirit of Diamanda Galas contrast nicely with relatively laid-back surf-jazz guitar harmonics. Intermittent isn’t exactly a track to meditate to but at least provides one with a feeling of brief respite such is its low-key nature, while I Have Friends Up There Redux is a fascinating piece that combines delicate spoken word vocals and post-rock in a fashion that reminds one of Enablers, it’s definitely a number that took me by surprise.

This Dirge Requires A Murder echoes the sounds that once again can be found on Dismemberment Cabaret, what with its streetwise New York City feel. Brenner in his recent interlocution with The Shaman for the Burn Pits video premiere, expressed in no uncertain terms how he felt that those who ‘reject the reality of this ongoing global climate crisis should be the first to be cast into the Burn Pit’ and the track definitely reflects this sentiment what with the bleak lyrical focus and discordant accordion/cello. Harbinger Winds at a whopping fourteen plus minutes long features up to nine guest contributors almost in the fashion of a jam band session, (thankfully Dave Matthews Band and Phish this is not) all of which makes for a suitably epic finale to the album.

In the aforementioned video premiere for Burn Pits, our editor Lee Edwards posits an interesting question as to whether this was a collaboration made in heaven or hell. The truth is it’s a bit of both, which makes the album predictably aurally uncomfortable for the uninitiated but all the more enjoyable for seasoned listeners like myself. 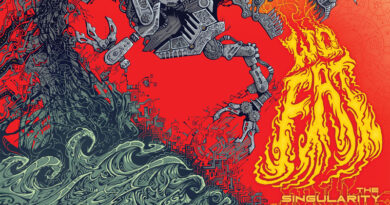