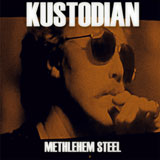 Back in 2012, The Sleeping Shaman discovered a dark spirit lurking below the streets of New York City. That spirit went by one name and one name only: Kustodian.

This mysterious one-member studio project sought to re-imagine Godflesh’s late ‘80s template for mechanised brutality for a more modern, yet equally uncomfortable setting: our continuously industrialised, soul-crushed Western world, circa Now. The debut Dusted Emperor was a lo-fi tornado of bludgeoning riffs, helpless screams, tripped-out drum programming and eerie, real-world samples of life’s everyday torments and misguidances. It was also a reminder that control, routine, rat race shuffles and the constraints placed on us all by the powers above are and always will be at odds with the creativity of the individual, the freedom of expression, the terrorising threat of violence and the sorrow of personal constriction. It also jammed out on some seriously bitchin’ riffs and huge blockrockin’ beats for good measure.

So what has changed on the heavily awaited follow-up Methlehem Steel? On the face of it, you could say: not a fat lot. We’re still confronted by a metric assload of distorted, down-tuned guitar dirges framed by a drum-machine set strictly to its “Doom” mode, fractured by the confusion of life’s six billion protagonists. It still sounds like Ministry guzzling down their crystal in a Digbeth, Birmingham (UK) warehouse whilst Godflesh and Jesu pound the stage in front of them, strobes blazing through the mists of their own depression. The title even pretty much says as much; a drug-addled pun against one of the very largest industrial metal (literally) manufacturers this planet has ever known. But yet, scratch below that and really FEEL the free spirit of Kustodian at work and you’ll quickly realise that this is a beast whose power has grown exponentially with the added time to languish in its underground labyrinth of twisted grace.

The production value has come a long way since the Dusted Emperor days. Each riff hits harder, the drums sync up better to the coarse, rasping din of the vocals and the songs slam around your skull with far better clarity than ever before. Check out the blitzkrieg of down-picked riffage on Steakhouse or the glorious dynamics of standout track Henchmen and you’ll instantly appreciate that this is an act who’s not so much stepped up as hurled itself across a chasm.

If you’re looking for out-and-out doom, then you’re treated to it in the bass-driven crawl of Canyon Of Idiots and the spooky, gloom-soaked atmospheres of Severance And Savings and opener Sunrise In Seacaucus. There’s still an esoteric, yet man-made feel to the likes of County Lines (Brisket), but it’s more grandiose, more impactful, more colossal and, yes, more worthwhile, than the intriguing grime that Dusted Emperor tortured us with. Certainly, it feels as though there’s been a more conscious effort to blend the guitars into each track’s thematic rhythm and less focus on having the drums push the boundaries of each song, rather have them in an almost spectator view of the end product, finally adding the tortured strings into that gorgeously swollen warbling tone at the hull of the likes of the deathly Compensation / Carving Station.

Kustodian has added a depth to each track, a narrative, a sumptuous blend of dozens of layers of synthesised grandeur that together forms a duvet which will either comfort you or swallow you, depending on how you’re currently experiencing factors both within and outside of your immediate control, factors like time of day, weather patterns, mood, workload, energy and fatigue. It sounds strange, but every time I listen to Methlehem Steel, I feel a different wave of emotion and sense of worldly balance or imbalance pass over me based on some subtly altered blend of these external elements.