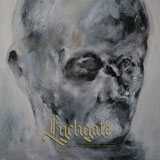 The band Lychgate from London, grew out of Archaicus, which was active untill 2012. In 2015 the follow-up to 2012’s self-titled debut comes out in a fog of mystery, titled An Antidote For The Glass Pill.

The Brits have made an album that can be considered a daring step away from their grim and distorted debut from 2012, into something much more oriented on the classic and gothic feel. If you plan to listen to it, let go of your black metal expectations. Don’t worry, you won’t have to embrace your inner goth girl either. This album is still a force to be reckoned with.

After a brief intro of buzzing static, the keys kick off with a run of tones that reminds, me as a listener, of the video game Super Ghost ‘n Ghouls, which had this amazing midi-keyboard music. The intro is called Upon My Tempest. The tones of majestic doom are promising much more for this record. Moving into Davamesque B2, it’s easy to notice that the guitars have moved to the background in the sound of these Londoners. It’s a symphonic, rhythm driven baptising into bleak, murky depths. Offering a haunting soundscape with some fierce bursts, this is something different. I Am Contempt has a heavy, wobbling opening, where the organ is played by what must be a clerical mad man. Using this as a guitar creates something that could approach the mad piping sounds so often described by H.P. Lovecraft.

The eerie introducing notes of Letter XIX are accompanied by a deep and foreboding bass sound. The dense atmosphere is like a thick layer of fog over a Victorian London in the days of Jack The Ripper. That is the vibe you get in general from Lychgate, it connects the classic with the new in a fascinating way. A warmer sound can be heard on the track Deus te Videt, with a twirling key section and epic marching rhythm. The song unfolds into big, operatic vocals, soaring high above the static music that remains meandering on the same line, another surprising tune that then suddenly launches into ferocious blast beats. When the track suddenly fades out, the ticking of a clock and giggling is all that can be heard.

An Acousmatic Guardian is an eclectic track full of noisy black metal and gothic keys that create a mesmerizing and dazzling sonic display. Switching between chaotic and minimal with haunting melodies and gritty distortion, the band keeps up their intriguing style. All the elements of black metal are still in there, though sometimes hidden. After another explosive track in the shape of My Fate To Burn Forever, the album enters its outro The Pinnacle Known To Sisyphus, which once more demonstrates the almost church-like atmosphere this band creates. An epic and glorious feeling is woven into the music, creating something unique and bewitching.

Black metal is a genre full of polarities. On the one hand it’s mighty progressive, on the other extremely fundamentalist. If you are on the second end, don’t bother with this. I’ve not heard something like this before and I recommend it to any open minded listener.