RidingEasy Records easily scores the award for best sense of humor; scouring their Facebook page you’ll find merchandise, posts and clips honoring good times, better weed, and all around debauchery. Taking life too seriously indeed can kill you quicker than a pandemic, but mistaking the tongue in cheek-ness for not knowing which bands are carved to slash would be a grave error. Portland, Oregon’s R.I.P. (John Mullet – bass, Willie D – drums, Angel Martinez – guitars, Fuzz – vocals) return with Dead End to stab that point through your temple.

Running on the fumes of 2017s Street Reaper, Dead End comes at a time when listeners in the know are still recovering from the toxic contact high of the band’s Pentagram via Geto Boys sound and aesthetic. If that montage makes you scratch your head, rest assured the hip-hop reference is for image only, as the music is metal through and through, with muscle ripped enough to crush skulls and grind teeth.

Producer Billy Anderson gives an anabolic boost to Dead End, taking the band’s inherent ferality and amping it to 11. Any grip on sanity the band had early on is gone, as opener Streets Of Death in its ominous synth meets 80s glam sets the mood for what is a retro ride into the sigmoid colon of hell – this is ‘street doom’…learn it, live it, and love it.

Judgement Night unveils a new and improved R.I.P., with a faster, more aggressive throat ripping rhythm section. The entire mix pumps with a lo-fi vibe like the recording studio was one big low pass filter; deft NWOBHM fretboard acrobatics elevate the track, with the whole affair like a train running off the rails. Fuzz boasting an insane snarl like Jus Oborn on cocaine and angel dust just adds to the agitation, making you feel more like a victim than a passive listener.

This is music that kicks the shit out of you, and makes you want to return the favor on some sucker who least expects it…

And through most of the album’s ten tracks, you either feel abused or out of breath, as songs like the title track are relentless in their aim to batter – Dead End kicks off with a cool bass thump and mid tempo, grungy, sleazy groove with a distinct punk attitude, like Hungry For Stink era L7 and Randy Savage’s slimy half developed love child went on an urban killing spree. Despite a consistently grunge tinged sound, the band draws from an array of familiar influences. If the early Misfits took their artistic cue from Jason Voorhees rather than Vincent Price, and blew out their speakers, they may have come up with a track like Nightmare, with its requisite chorus ‘Whoas’.

But luckily for us who just want a hard rocking good time, the core of the band’s sound relies on traditional heavy metal and doom – Death Is Coming is a great anthemic jam, with cowbells and riffs showboating like flexing biceps; all it takes is one solid gut punch to knock your nuts to the floor. Out Of Time in its theatrical 80s heavy metal meets Electric Wizard attitude, rocks an ataxic swagger like a strung out urban nightmare version of Michael Jackson’s Billie Jean. This is music that kicks the shit out of you, and makes you want to return the favor on some sucker who least expects it.

Album closer Dead Of The Night starts things eerily enough with gentle acoustics and storm/rain samples before raging into full on doom territory. It’s an intentional ode to cheesy B movie aesthetics…like embracing the lowest budget appeal of cheap thrill slasher flicks of the early 1980s; but there’s a reason why Friday The 13th had an infinite number of sequels – we instinctively crave an easy no frills scare, too ridiculous to be real, but bloody enough to scratch that morbid itch. R.I.P. know how to tow that line between raunch and disgust, crafting a soundtrack to a horrific world with just enough comedy to be bearable…and with Dead End, downright addictive. 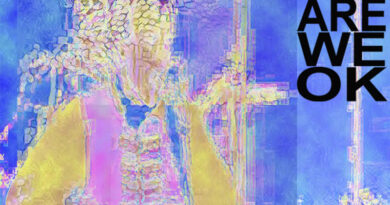