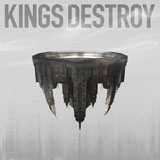 Kings Destroy by Kings Destroy sounds a lot like a junior varsity Monster Magnet. I like Monster Magnet. Therefore, it would naturally follow that I like Kings Destroy. True. However, whereas Monster Magnet have proven themselves (to me) through their distinct innovations, Kings Destroy, haven’t (yet?). That may not be their problem, though. The band indeed is a good solid music making entity assuredly. Kings Destroy can deliver the goods, the metal goods. If you’re like me and already have a storeroom full of similar and almost identical wares, I’m not sure that this will “do”; do anything to or for you. I really see nothing too exceptional here and when you’re a new band trying to make a name for yourself, it seems to me that, historically, your only way to gain access to that unmerited sought after road of fame, is to bring to the table something new, fresh, needed, desired, impressive, and yes, it is wise to be able to provide something not even yet externally conceived. So, if you follow what I’m saying, this new material, found on the new Kings Destroy, has good quality metal musicianship, but still, I require more; not sure about you.

Smokey Robinson is the title of the first song; initializing the Kings’ method of destruction. As you can suspect by the song’s title, these boys don’t take anything too seriously. It’s all tongue in cheek. Resting and residing within the band’s aural persona, there are two outstanding conflicting dynamic forces that make for an interesting panache. This fact has grown to be, for me, the most engaging feature of Kings Destroy’s sound: the music: dead serious and no B.S.; the lyrical content: capricious and silly. I guess, if you can possibly imagine the resulting racket as sounding similar to that which would most likely emanate from, say, a mad scientist’s unethical, inhumane cross breading experiments combining the ballsy doom-laden power riffs of The Obsessed with the Melvins lyrical sense of absurdity, if you can imagine that, you can imagine Kings Destroy. Again, the music compels right from the point of its first declaration exemplified on this first song. It’s powerful, well played, compelling and metal through and through. Consider the seriousness of Priest’s sound. Now, imagine that whole scene, but stepping in on vocals and replacing Halford, Larry the Cable Guy, performing the role of the invoker of lyrical ambiance. The music on this album is consciously fashioned satirical metal. Spinal Tap was amusing, but the comedy lied in the fact that they weren’t trying to be. Kings Destroy is.

The satirical goofiness felt in the first song lingers almost as a residue as the album continues. Mr. O, the title of song number two, I’m sure, has some sort of relevance. What that may be eludes me, though. This summons another noteworthy trait this band consciously provides; the unintended articulation of ideas that won’t make or break your life or your day, unimportant non-life-threatening ideas. There is nothing here to critically ponder. Who or what Mr. October is, is beyond me. As to why the premise of this ditty eludes me is not exactly clear. I don’t understand everything that the lyrics try to convey. Remaining ignorant could be Kings Destroy’s objective. Perhaps by not laying it down clearly, the questions and holes that continue about the song could serve the function of leaving things open ended to be filled or closed by whatever the listener happens to see fit, during a certain time in their lives. Such is the eternal charm of art. As with all genuine artists, Kings Destroy doesn’t seem concerned about conveying the absolute unwavering isolated significance of some irrelevant obscure idea. The multiple possibilities Kings Destroy injects into their music/lyrics count as a forewarning of metal worthiness. Kings Destroy knows that infusing their songs with a myriad of possible acuities, better serves.

W2 is song number three. I know about W2 forms, but don’t ask me what this song’s intended objective is. I don’t know. Kings Destroy considers the topic significant, though; significant enough to harvest any linking, pertaining gems this subject may hold, from their muse. Mythomania, the fourth song, embarks on its course with a slowed down acoustic, gently building intro. This is well played and succeeds in swelling a tension within the song’s structure. A widely known verity of modern popular music, as well as in classical, is that in order to achieve a satisfying emoting of sentiment from your audience, tension is necessary. In order to appreciate light, darkness must be referenced. I appreciate the well placed dynamics that Kings Destroy supplies in their chosen art. Easily breaking the deal would be if the Kings Destroy sucked. Good thing they don’t. If the band wasn’t competently operational and proficient at what they do, the magic attempted through the impressive and well calculated construction of their songs would just fall way flat. You can’t say, “Wow, man, song’s fucking great!…sounds so heavy, it just blows my mind” if you’re laughing at how much they suck under your breath.

Unfortunately, the rest of the album is just more of the same. I mean, that’s not necessarily bad, because as I mentioned before, Kings Destroy can deliver the goods. They can bring the metal. They can even fry it in a pan. The music they purport is enjoyable. It isn’t wimpy. They incorporate many of the successful characteristics that have inundated heavy music throughout its newly long history. These proven methods are contained within the music on this release; including the slow acoustic intro, the super-fast, punk-induced screaming (complaining), the sludgeing grind of power chords, the command of true metal, and the well-conceived and constructed arrangement of songs. If I was new to metal, this album would pretty much have it all. For me, that’s not enough anymore. I need a revolution and/or revelation to satisfy my desensitized existence. While, not a bad thing, I’ve heard all of King’s Destroy’s tricks before. If you haven’t, then this is definitely something that would appeal to you. For me, the zillionth time I experience something can only advise me of one thing. To this, I have become numb. All in all though, Kings Destroy is not a bad effort by any stretch of the imagination, it’s actually really good. Alas, I need better.