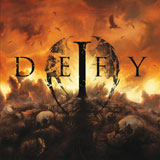 My family have always been big on supporting local industry. Growing up a stone’s throw from I Defy’s home of Swindon meant we got a Dyson, my Grandparents bought a Honda and I feel the pressure of my Wiltshire born solidarity wanting me to root for I Defy even though I have lived ‘dahn sarf’ for the best part of 10 years, and despite my first thought being it was a naming failing of epic proportions to take a name already associated with a more well known punk band…

However, this I Defy are much more angry, boasting an alumni of established musicians (ex-Eternal Lord, Romeo Must Die, Machine Made God and As Winter Burns) this is a band with considerable muscle and a heartfelt concept of raw emotion which they have distilled into 9 tracks on their debut EP.

After a slow burning intro – a pounding, almost industrial thrash with ‘We Are The Light Of The World’ (ironically?) gargled over and over in a scraping death metal vocal they kick off with the jackboot to the face that is ‘Wasted Year’. It is raw, visceral, laced with spite and delivered like the bastard son of Face Down and Napalm Death before collapsing on itself into a hardcore breakdown. When the melodic section appears it recalls a heavier and less delicate Poison The Well – angular and jagged but with a guitar line that snakes through the pummeling rhythms and into the back of your brain.

After this onslaught ‘Eveline’s Curse’ opens with clever guitar work before it progresses into a stop/start attack of dual guitar and double bass kick, impressive for it’s delivery but a little ‘metal by numbers’ at times. ‘Hall Of Mirrors’ stands out with another awesome heavy introduction dripping with intricate guitar work courtesy of Alan Swadden and Stuart Jackman and riffs that could level buildings. Over this, vocalist James Hackett screams like his vocal chords have been caressed by sandpaper and there is no denying the raw emotion the band have conjured here and captured with some skill in the singers own studio by producer Adam Euson.

‘Awakening’ throws you off balance with its piano picked melody and samples of rain, sounding like it would belong at home on a Nine Inch Nails album; Serving as a brief respite and an eye in the storm around it as it segues into ‘Labyrinth’s suffocating eruption of desperate urgency.

This is a band with a decent pedigree and only less than a year old so the room for potential is great. There is no doubting the sincerity or the personal and passionate nature of the music – at times part hardcore, part death metal, flavours of industrial even recalling doom masters Cult Of Luna, but at times ‘I Defy’ is a little too one dimensional in it’s delivery. The vocals maintain the same bark throughout and some of the tunes rush by in a cathartic release that would instill a violent pit, but its participants would probably struggle to pick out tunes like ‘Red Mist’ and ‘One Step Too Far’ from the rest.

Far from being a poor release this is a solid ground to build on – they certainly have the chops to deliver balls out metal music, but at this moment in time they have more in common with, say the production line of Honda than the revolutionary design of the Dyson…