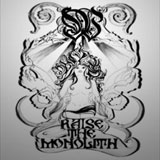 Widows are DEFINITELY here to rock our faces off. The Nottingham-based hooligans play it like they mean it across all four tracks of this, their debut release, and rock out HARD. Quite possibly with their cocks out. It’s hard to tell just by listening. One thing I CAN tell though, from first listen to ‘Raise The Monolith’ is that Widows have a VERY bright future ahead of them if they can maintain and build upon THIS level of quality. Seriously.

Self-admittedly in thrall to Down – from whom I suspect Widows half-inched the EP title – Clutch, COC, Goatsnake and the Kyuss-spawned Desert Rock scene, Widows also bring an unacknowledged hardcore element to the table, something that serves to set them apart and mark them as anything BUT another generic Kyuss/Fu Manchu knock-off stoner band. Their riffs are taut, lithe and muscular, their grooves are anything BUT lazy and the vocals definitely have an aggressive hardcore edge to them. No sir, don’t call them hippies!

Opening track ‘The Kiss Of Failure’ throbs and lurches like the bastard offspring of Sixty Watt Shaman and Old Man Gloom, replete with slightly buried roaring vocals and irresistibly groovy restless riffage. It’s one hell of a strong opening shot and serves to show the listener exactly how NON-generic Widows are. Their lurching grooves stomp along nicely without becoming hackneyed or unwelcomingly repetitive and guitarist James Kidd shows a great deal of subtlety and deftness, throwing out li’l harmonised runs in-between the grooves and dishing out aggressive hardcore chordage at just the right moment, ably anchored by the throbbing low-end of bassist Evan Christodoulou and the right-on-the-money drums of Steve Mellor. Second track, ‘Fuck-Knuckle’, really does put me in mind of a hardcore version of early Sixty Watt Shaman material, which really is no bad thing at all! Some very skilful playing on this from James Kidd – an almost psychedelic recurring break and a tasteful solo really add something to the southern groove, and vocalist Adam Joliffe sounds just dandy too, having a throaty southern shade to his vocals here – sounding like a cross between Sixty Watt Shaman’s Dan Kerzwick and hoary ol’ Lucky Sylvester of the much-missed Dukes Of Nothing.

Following on from the third track, and total groover, ‘Whores Of Babylon’, a fairly straight-forward southern-style rocker with a seriously aggressive forward-momentum to it, the fourth and final track ‘Drowned In Chains’ is a total change of pace and mood. Starting off as a lead-heavy pounder with the consistency of audio molasses, the track suddenly picks up momentum in the guitar department, around the half-way mark, with a scything chainsaw volley of chugging that takes us clean through to the other end of the track before resolving itself slightly into big, open hardcore chords again. It sounds a whole lot darker and more vicious than what has come before, and those buried roaring vocals really add to the oppressive atmosphere. Having the guitar open up the momentum shift, as opposed to the drums, really does change the dynamic of the track in an interesting way – in fact, it seems to me, that the way in which Widows collectively approach EVERYTHING on ‘Raise The Monolith’ is all about keeping the band AND the listener interested, whilst still providing good ol’-fashioned heads-down ROCKIN’. Well, hell, more power to ’em I say. Whatever they want to do, wherever they want to go from here, they can count me in for the ride. Whatever comes next should be WELL worth a listen.