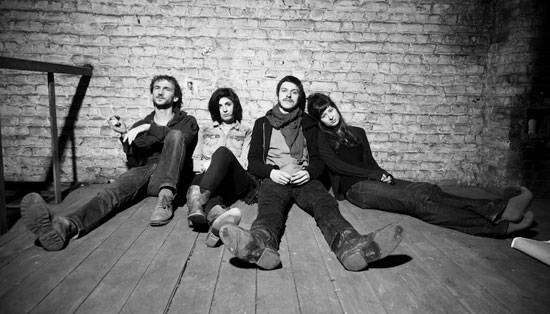 Formed in 2011, Moaning Cities are a young Brussels-based quartet who released their debut LP last year, Pathways Through The Sail.

The band comes from the ’60s psych revival end of the scene; think The Doors, 13th Floor Elevators, Baby Woodrose, The Heads and Wooden Shjips, or even some acts closer to home like Ride and The Stone Roses. Vocalist Valérian Meunier is especially reminiscent of the honest approach of singers like Ian Brown and Richard Ashcroft of The Verve.

The band have another strong element to them: their love of North African and Middle-Eastern instruments. On stage they wrap many of their songs in a blissed-out haze, with Timothée Sinagra’s hypnotic sitar and Melissa Morales’ ethnic percussion. They know how to wig-out too, fuzz rockers like lead single ‘Bread and Games’ will get your ass moving on the dance floor.

A nice diversion from the doom and sludge at the heavier end the festival experience, Moaning Cities will get London howling with satisfaction at this years’ DesertFest.