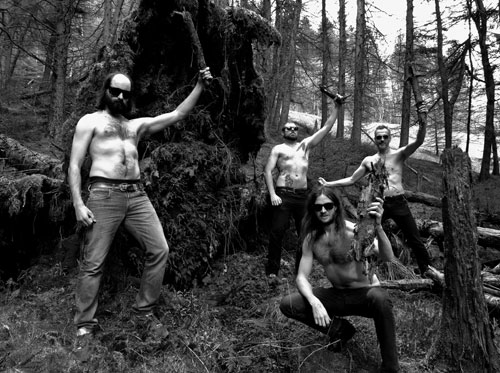 Hackney’s Bad Guys have been disturbing the peace since 2009, with two EPs and one album on their criminal record.

With song titles like Alcowhore, Brick Toothpick, My Love Is Disgusting and a near-release second album called Bad Guynaecology, you can be sure they don’t play shoegaze. This is rock recommended for drinking and fighting to, and maybe a few other activities that cannot be printed here.

On stage the four musicians present a formidable wall of double-neck guitars. Slabs of deathly noise rock peel off from guitarists PJ and Dave, which have the tendency to induce stage dives at an alarming rate. They are aided and abetted by Stuarts’s serial killer vocals and Tamas’s thunderous drums. Basically, take the attitude of Scissorfight and Clutch, and filter it through ZZ Top’s beards and if that sounds like an offer you can’t refuse then come view the identity parade at DesertFest 2015.