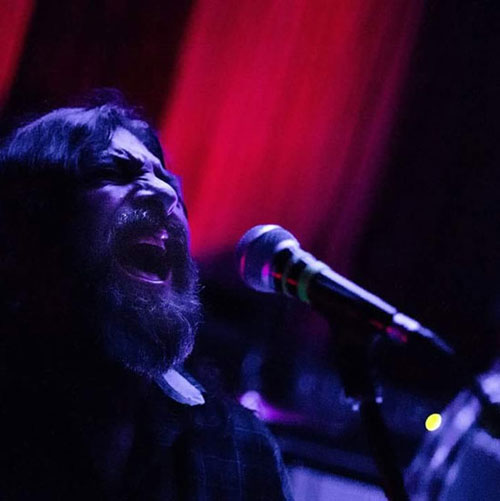 I wasn’t sure what to do when asked to come up with my top ten for this year…I wasn’t even sure if I’d heard ten albums this year if I’m honest as I haven’t really paid much attention to what’s happening in music for the last 12 months. On investigation I was surprised at how much I had heard, and even more pleasantly surprised to find that some of it was bloody good! As with much of my listening it’s the older guys who still fly the flag for quality rock but there are still some good newer bands out there that stick their heads up above the parapet of mostly yawnsome, generic genre bandwagon jumping. Honourable mentions have to go to Carousel whose 2013 album is some prime, retro hard rock, Cybernetic Witch Cult who fly the Cathedral flag in that band’s wake and Desert Storm whose Omniscient album is their finest work yet. Perhaps most notable by its absence is Clutch’s Psychic Warfare. Don’t get me wrong, it’s a decent album full of good songs…but from Clutch I demand a little more than decent, I demand outstanding but they seem to have settled into a pattern and style that sits comfortably and they’ll retread it…almost too comfortably, so for that reason they didn’t make the cut. 2016 sees a new album from Anthrax…and new music from Grifter…so that’s all I need.

10. Ten Foot Wizard ‘Sleeping Volcanoes’
I have to admit this number 10 slot was subject to great consideration and competition but Ten Foot Wizard edged it with an album which shows that stoner rock doesn’t have to consist of a bunch of mindless, knock off Kyuss riffs. In fact I’d hesitate to even class Ten Foot Wizard as a stoner band, their sound encompasses classic 70’s hard rock, the blues and even touches of indie. This is an album of great variety, superb musicianship, killer song writing and features the song title of the year in Covered In Tits, what more could you want?

9. Michael Monroe ‘Blackout States’
Music for me isn’t about being the slowest/fastest/heaviest/most doomy/most aggressive/whatever…it’s about one thing and one thing only, writing great songs. For 35 years through Hanoi Rocks, numerous other bands and now well into a renaissance with his solo career, Michael Monroe is one of the best song writers there is and after all this time he has lost none of his fire. Blackout States takes in glam, punk rock, country, blues and all points in between but, regardless of style, is a collection of exceptional songs…nothing more, nothing less.

8. Lifer ‘Black Mountain Rising’
Sometimes you just need some no nonsense, heads down metal…and that’s where Lifer come in. This is a band that doesn’t mess about and their 2nd album is a non-stop barrage of thrashy riffs, southern grooves and Motörhead style rock and roll all bound up in a massive rush of total metal!

7. Motörhead ‘Bad Magic’
Basically it’s Motörhead…and Motörhead don’t do bad. Admittedly Lemmy is looking frailer now than a dragonfly’s wing and you do have to wonder how many miles he has left in him but he doesn’t let it show on Bad Magic. Motörhead have never made a bad album (in my opinion anyway) but since 2004’s Inferno they’ve hit a level of quality and consistency that this album continues. It’s Motörhead…and it rules!

6. Bad Guys ‘Bad Guynaecology’
Bad Guys don’t sound like guys you would invite home for tea with your Nan! They are contenders for song of the year with Prostitutes and sound like a blasphemous mix of Motörhead, punk, blues and Amphetamine Reptile nastiness. They are wrong in all the right ways and Bad Guynaecology is an album that will compel you to fight, fuck and fall over in equal measure.

5. Gentlemans Pistols ‘Hustlers Row’
It was all looking a little bleak for the Pistols for a while. They were never the most prolific band to start with but the loss of a bass player and general inactivity would lead you to think they were done and dusted but the addition of Robert Threapleton from Blind Haze has breathed new life into the band. Hustlers Row is a sublime collection of 70’s influenced hard rock that takes the work they’ve done before and adds a layer of sophistication and song writing prowess that lifts them to the next level.

4. The Atomic Bitchwax ‘Gravitron’
Why are this band not megastars? The first four albums take 70’s rock, add a little punk, a little prog and a little crazy but temper it with fantastic songs. Admittedly The Local Fuzz was very clever but ultimately disappeared up its own arse but Gravitron is a full on return to what they do best…full bore, balls out, fuzzy rock and roll!

3. Iron Maiden ‘The Book Of Souls’
There is a reason why Maiden are one of, if not the biggest metal band on the planet…it’s because they really are incredible. 35 years after their first album you would forgive them for running out of ideas but Book Of Souls is a formidable return to form that sees the band building on their tried and tested formula to create an album of exceptional songs, variety and depth. The fact that Bruce Dickinson recorded the album with tongue cancer and still sounds incredible is testament to how far ahead this band still is of everyone.

2. Suns Of Thunder #Start As You Mean To Get Down’
This album has literally only been out about a week but I’ve been privy to it for several months and I can honestly say it is the best album released by a British band this year…it wipes the floor with all their contemporaries. Huge grooves, an awesome collection of never less than stellar riffs, killer dual vocals and a set of songs that are so damn catchy they could have almost been recorded directly to your brain!

1. Slayer ‘Repentless’
It did look like it was all over for Slayer with Jeff Hanneman gone, the man responsible for some of their key tunes like Angel Of Death. However, fans should never underestimate Kerry King’s passion for Slayer and the fact that he’s no slouch when it comes to writing himself. Repentless sees Slayer re-energised and right back up there…an album packed to capacity with killer tunes. Paul Bostaph is more than a match for Dave Lombardo and Gary Holt slots in perfectly with some very tasty lead playing. This is almost up there with the 80’s classics.