This year certainly hasn’t been as chaotic as the last, but it feels like there’s been even more music making its way out from artists who spent the time usually taken up by touring to write, record, and release new music. It’s been a very difficult task to whittle the many amazing records of 2021 down to my ten favourites, let alone putting them in order because any of the top five or six could have been number one on the list. But after much re-listening and contemplating I managed to reach an order I am happy with.

Just sneaking in is the sublime twenty-one-minute blast from modern heavy music innovators Full Of Hell. Garden Of Burning Apparitions sees the band involve chaotic hardcore tendencies with their mesh of crushing grindcore and caustic noise in a way they haven’t really attempted before. The result is a brilliant record that I could probably listen to over and over again into eternity.

While I wasn’t fully convinced by Everson Poe‘s sample focussed work previously, Grief completely turned my head. This record feels like watching an avant-garde stage play, with scenes and acts moving into each other with a theatrical narrative that isn’t quite what it seems. The samples from gospel preachers and other speech givers are given new meaning in a way which is utterly compelling, while the melodic and brutal multi-faceted heaviness underneath makes for a striking and emotive combination.

8. The Sun And The Mirror ‘Dissolution To Salt And Bone’

Truly original work from The Sun And The Mirror that combines drone metal with noise, dark ambient, heavy psych, and doom in rather unexpected ways. There are many sounds here that are atypical of what might be expected from a drone metal album, and on repeat listens it wriggles its way into your brain, taking you away to this duo’s totally enveloping world, and creating a truly amazing musical sensation.

The mix of blackgaze with late-90s and early-2000s underground screamo is something a few blackgaze bands have dabbled in as post-hardcore becomes a wider influence in the genre, but none have done it so fully and perfectly as Underdark. Our Bodies Burned Bright On Re-Entry is a record so full of overflowing passion that it’s hard to constrain, but throughout this record the band have been able to find that creative balance without compromising the impact of their emotional subject matter.

It seems weird to say this about an album that is only number six on my list, but Gegrepen Door De Geest Der Zielsontluiking is pretty much flawless. Three tracks and thirty-five minutes of impeccably crafted atmospheric black metal that has elevated Fluisteraars to be one of the most prominent new bands in the genre. The fact that this album isn’t higher up on the list just shows how much quality and innovation was on show this year.

The best hardcore band on the planet? The most innovative? The most unique? Turnstile probably fit into all these tags, as they continue to defy the expectations of what hardcore punk can be. Glow On has that rare quality which all great albums have; it feels very familiar and yet totally unique at the same time. It encompasses forty+ years of movement in hardcore while also introducing new ideas that feel so relevant, not just in the underground world of hardcore, but to the far-reaching branches of popular music. Crucially though, at no point does Glow On feel like a band pandering to commercialism; instead, it feels like a truly passionate and glorious moment for hardcore.

How and why does a message of peace, love, and solidarity become so divisive in this day and age? It’s something that I’m sure many of us have pondered this year, and I feel that Violet Cold brought this to the fore during the creation of Empire Of Love. It’s an innovative record not just because of its themes, but because there really has been no black metal album that sounds quite like this before. With Empire Of Love Violet Cold made their defining statement; bringing together the old with the new, the bleak with the euphoric, and the familiar with the totally unimaginable.

The best album yet from one of my favourite bands of all time. Primordial Arcana feels like Wolves In The Throne Room‘s magnum opus after nearly twenty years of setting the highest bar in the world of atmospheric black metal. It also continues a progression that started with 2017s Thrice Woven, as Primordial Arcana contains some of the band’s heaviest and most doom-influenced material to date. In my full review, I looked back to a time in their career where fans wondered whether Wolves In The Throne Room would continue to produce metal at all. It’s remarkable listening to this record to think that this was ever a concern because with Primordial Arcana the band have once again elevated black metal to new heights.

Back in April I wrote a piece for Weirdo Canyon Dispatch, the Roadburn fanzine, where I named Gas Lit my album of the year so far, and it’s testament to how phenomenal it is that only one album has jumped above it in my list. Sonically this is such a unique record that sits between the most experimental reaches of drone, noise, and doom metal while warping itself through vast emotional layers. However, it’s the way Divide And Dissolve use this music to express their fight against colonialism, imperialism, and indigenous land displacement that makes Gas Lit such a tremendous and vital record.

1. Panopticon ‘…And Again Into The Light’

…And Again Into The Light is stunning, vivid, and completely breathtaking. It’s Panopticon‘s most fully realised album yet, bringing together all the elements of the project’s sound (black metal, shoegaze, melodic death metal, roots and bluegrass) with a sublime flow of dark melancholy, emotional torment, and haunting atmospherics. Yet throughout the anger, the sorrow, and the mourning, there is a feeling of fragility and understated hope that somehow drives this album forward.

The more and more I listened to this album, the more it began to really affect me, making it increasingly harder, despite all the amazing music this year, to not make this my album of the year. Eventually, I gave in and embraced how absolutely perfect this record is. Quite simply, …And Again Into The Light is a masterpiece.

There were several disappointments from some big name acts, but also some excellent albums that didn’t quite make my top ten including the following that are in no particular order… 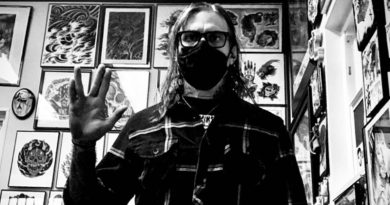