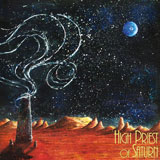 Norway is known more for it’s glaciers, coastal fjords and black metal than it is for a laid back psychedelic 60s/70s vibe, but that is exactly what High Priest Of Saturn are, determined to disprove with their latest outing. Bursting onto the scene with their Roadburn approved Self-Titled debut album back in 2013, they set out their stall as competent doom merchants with a flair for bombastic, occult laden sensory deprivation.

Starting out very much under the influence of Sleep and Black Sabbath, they carved out luscious thick slabs of doom that inched their way across the frozen landscape, guided by the sound of bassist and vocalist Merethe Heggset’s ethereal voice.

This year’s follow up, Son Of Earth And Sky, sees the three piece of Heggset, Andreas Hagaen (guitars/drums) and Martin Siversten (guitars) fleshed out by the addition of full time organist Ole Kristan. High Priest Of Saturn have deepened their already spell binding doom and incorporated more of a looser, jam style nod to the those trippy parts of the first five Sabbath albums, making their sound bluesy and subtly multi layered as the Hammond organ adds a tumbling, trembling delicacy to their craft.

Despite having recorded Son Of Earth And Sky back in August 2014, the album is a step on from their debut as opening track Aeolian Dunes shows, with the slow burning epic vibe turned up to the metaphorical Eleven, while the music ebbs and flows from grinding doom to the haunting, layered with other-worldly female vocals, heavy with echoey effects like the siren song of a spectre.

The term Aeolian, in regards to music, has all kinds of meanings relating to chord progression, scales, harmony and tone. Here the quiet, wistful music drifts and builds, always working towards some unseen goal and is only fitting that the song meanders into Ages Move The Earth, like some gradual slide of the seasons. The beautiful mellow instrumental passages and ghostly harmonies, accompanied by a mesmerising, winding solo, again recalls those classic early Sabbath albums such as Volume 4, where the band add thoughtful blues and deft musicianship into the bludgeoning fuzz.

Spanning the five epic length tracks is a spiritual concept and connection to nature, the title track encapsulates this as it ebbs and flows like the tides with it’s woozy organ and laid back guitar. It’s as if some gravitational force from space is pulling at the music, swaying the gentle passages and baring down on the heavy doom moments.

It is not all a hazy, smoke filled trip as the Warming Moon starts darkly, reminiscent of Weight Of Light era SerpentCult and contains an up tempo shift that sees extended keyboard runs and a muscular stoner jam, before Flood Of Waters takes it back down a notch to a massive instrumental psychedelic Hammond overdrive, which also features some serious wha-wha pedal abuse.

Despite taking only five days to record, this album has moved at a crawl towards its release date nearly a year and a half later. Existing fans of the band won’t be disappointed with Son Of Earth And Sky as it takes their previous blueprint and seeks to drive the artistic vision further. Not as overtly heavy as their debut, this record feels more organic, possibly in part to the live recording giving it that jam room vibe, that feels more coherent in theme and more like a story told in movements, rather than standalone songs.

What they have delivered is an extremely dense, well crafted album of folk laced, trippy doom that features some beautiful and powerful moments that flows over you like the calming sound of a babbling brook. If you want your doom to smash you in the face and terrify you, then this simply isn’t the album you want to put on.

If you want to put on some music and drift away to nature, to outer space and experience some soothing journey of the mind with an epic emotionally drenched soundtrack, then you might have found a new church to worship at. 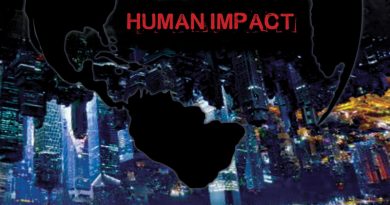