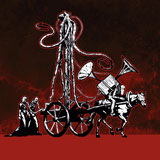 Justin Greaves will be a familiar name for many, as sticksman for both sludge legends Iron Monkey and Doom icons Electric Wizard. His ongoing project Crippled Black Phoenix sees him taking on the role of multi-instrumentalist, shrugging off the safe confines of genre to do whatever the fuck he wants, however the fuck he wants to.

Nowhere is this as apparent as on the New Dark Age Tour EP, where the majority of the runtime is taken up by a two-stage cover of British progressive rock icons Pink Floyd. We’re more than used to seeing the odd cover tacked onto the end of an EP, but it’s a rare thing where the covers are almost twice as long cumulatively as the original offerings.

Those original offerings are Spider Island and the titular New Dark Age. The former begins with a rush of bombastic brass and a film sample, before the track proper crashes in like a wave of honeyed tar. It’s dirge like, bearing similarities to And The Bees Made Honey … era Earth in pacing and overall feel, but with a slightly more ‘epic’ scope. A reverb heavy guitar line climbs to the top of the pile, swiftly joined by drawling vocals. There’s an easy pace and quite dense layers, cut through by splashy cymbals, and you’re left with the impression it’s been meticulously constructed from the ground up.

New Dark Agekicks in with an abrasive, echoing siren and the unmistakable sounds of conflict. A sombre guitar line and mournful synths enter the fray as the sample fades out, and breathy vocals bring with them a sense of melancholic, world wearied honesty. This is a more reserved affair, a bluesy guitar overdub complementing the slow, shuffling drum line. There’s a steady pace underpinned by swelling organ and warm bass, before the main riff bites, a darkly dramatic affair with a few hints of slowed-down A Perfect Circle. Things drop into a repeated guitar vamp, which evolves into some solid chords and then into a nice direct driving section, showcase some excellent bass work and some denser layering. Morphing again, we’re greeted by a soundscape of burbling synths like an 80’s sci-fi score, before the main instrumentation joins again for a slightly post-rock tinged victorious, uplifting route home.

The second ‘half’ of the EP consists of Echoes Pt. 1and Echoes Pt. 2. Easing us in with some crashing waves and a sample interview from Live In Pompeii, and continues through moments of spectral calm, psychedelically blossoming guitars and glacial pacing. It’s theatrical and very enjoyable, showcasing the raw musical talent Greaves and co can level. They move through moods and segments as effortlessly as Floyd did, and maintain a sense of contemporary relevance whilst still indulging in evoking nostalgic tones and humours. It’s incredibly ambitious for a band to attempt to cover another artist held in such high esteem, but we’re willing to say CBP have pulled it off and then some. It’s a gloriously tongue in cheek homage that ends with a mutter of ‘chips and beans and a tea’.

Overall this is a solid EP, showing that Greaves and his rotating cast of supporting artists are as intent as ever to push boundaries and disregard expectation. Would it have been better to hear 4 original tracks, rather than what is mostly cover material? Perhaps. Is that material executed incredibly well, with both conviction and talent? Definitely. Original tracks are for albums. Crippled Black Phoenix have used the EP format as intended – to bolster their discography whilst stretching their creative wingspan. 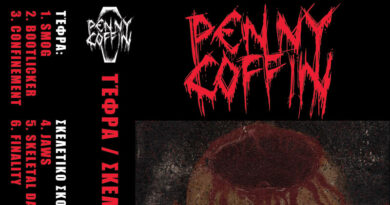 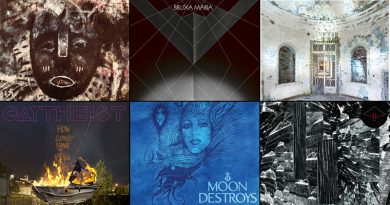