Spanish five-piece Moura are from La Coruna in the north west tip of Spain and are comprised of Diego Veiga (vocals, guitars), Hugo Santeiro (guitars), Pedro Alberte (bass), Fernando Vilaboy (keys) and Luis Casanova (drums). This is their debut album and the members have featured in a lot of other groups too numerous to list here. The band are notable for singing in their native Galician, which is primarily spoken in the region Moura are from.

The album cover elicits a pagan feel that wouldn’t out of place in The Wicker Man. Certainly the opening of first track Eira evokes this very image with the acoustic folk and trance, like chanting before slamming into some full on organ led prog that reminds me of Mondo Drag’s album Initiation, never a bad thing seeing as that was one of my favourite albums of 2016.

In fact, you can tell this is a prog influenced effort by the track lengths, 4 tracks and the shortest over 7 minutes long. However, this may be prog, but as with Mondo Drag it has an energy that prevents them straying into self-indulgence and tedium, in other words this isn’t Tales From The Topographic Oceans. The track ends with a chaotic breakdown and aplomb, an excellent opener.

Da Interzona A Annexia, or From Interzona To Annexia, follows and is a literary reference to Naked Lunch by William S Burroughs, admittedly a book I struggled to engage with the last time I read it or attempted to. Luckily the track isn’t anywhere near as impenetrable, coming off as a curious mix of King Crimson and vocals that bring to mind the legendary Mike Patton and Serj Tankian of System of a Down, the latter especially rings true as it has that distinct Armenian/Middle Eastern flavour towards the latter part of the track. These lads seem to have been listening to Israeli prog metal outfit Orphaned Land too.

this may be prog, but as with Mondo Drag it has an energy that prevents them straying into self-indulgence and tedium…

Next up is the longest track on the album, the near 14-minute O Curioso Caso De Mademoiselle X, or The Curious Case Of Mademoiselle X, a reference to a patient of French neurologist Jules Cotard in 1880, who believed her organs were missing and that she didn’t need to eat, Cotard watched her starve to death as a result. Cheery eh?

The track starts off very quietly, at such a low level that I was checking to see whether I had turned the volume up sufficiently. The slow build up leads up to a rather tasty riff like an understated Zeppelin at about 2:27. I have absolutely no idea what the band are singing about, my Galician is a little rusty, but the vocals are impassioned and pleasant to listen to. There is some excellent soloing from Diego and Hugo as well. The progressive flavour of the track reminds me of Lowrider’s Sernanders Krog, but not as heavy and with organ. As with that track it meanders a bit, but makes for a fascinating listen, nonetheless.

Ronda Das Mafarricas finishes the album and is a cover of a track by legendary Portuguese folk and political musician Zeca Afonso. Moura’s version is longer than the original which was a comparative ditty at 2:46, and while they add their prog and psych influences, they manage to maintain the spirit of the original.

In conclusion, it would be interesting to know what the lyrics translate to as the songs clearly have a literary and intellectual angle to them. I would further maintain that this is an enjoyable listen that will appeal to prog and psych heads out there. 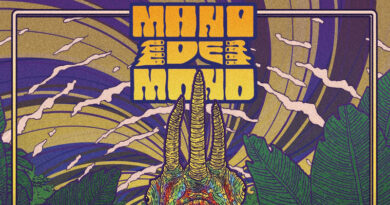