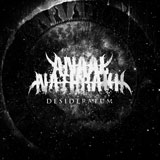 If you were to describe Anaal Nathrakh to someone who had never heard them, you’d probably say something along the lines of ‘They sound kinda like if you trapped Nihilism in a wind tunnel’. Very few acts have ever matched the pure, skull fucking intensity that Anaal Nathrakh produce, be that on the stage or on record. They’re also remarkably productive, releasing 8 full lengths in a mere 13 years since their debut, The Codex Necro, in 2001.

Onto Desideratum, the band’s newest release and successor to 2012’s devastating Vanitas. After the menacing of intro track Archeronta Movebimus, which sets the scale for the unleashing of the sound holocaust that is Unleash. A chaotic whirlwind of blastbeats, howling shrieks and the now traditional, vast Emperor-esque clean vocals, Unleash is everything you expect this band to do and more. There’s some fat, almost dub beats hidden within there as well. Monstrum In Animo is another example of the blastbeat volcano erupting and spewing aural violence everywhere. These are shrapnel peppering the foundation of industrial filth and the searing, black metal riffs. This track is the sound of the machines winning.

Anaal Nathrakh have perfected this terrifying mix of grindcore’s fury and speed with gritty industrial bleakness and black metal’s nihilistic streak. But what has always set them apart for me has been the grand vast sections with the soaring clean vocals. There’s few bands that could get away with clean vocals like that in a black metal song without being labelled sellouts or posers. Anaal Nathrakh manage it simply because their music is so violently uncommercial that the clean vocals could never be accused as an attempt to break the mainstream. They are there to enhance the music. A light in amongst all that hate. If it wasn’t so relentlessly dark and full of tales of annihilation or Armageddon, you’d almost think there was hope for us. Almost.

The savage odyssey continues, through the grandeur and carnage of The One Thing Needful, and the blasting A Firm Foundation of Unyielding Despair to the twisting, thrashing malevolence of Idol and the vast title track. There has been a definite increase in the electronic and industrial influence in the sound here, employing techniques seen in some of Aborym’s best work. Crashing dub beats drop away into savage blackened grind, while cold, industrialised noises linger in the background. Vocalist Dave Hunt out does himself on every track, his voice tearing, shrieking, growling and soaring whenever required. He has to be one of extreme metal’s most versatile vocalists, going from a wonderfully rich clean vocal into the terrifying banshee shriek without a pause.

All in all, Anaal Nathrakh have done it again. With this prolific release schedule, you would’ve thought that they would have released a dud at least once. But their work has always been consistently of high quality and Desideratum in no ways stalls that progress. Another horribly beautiful record of nihilistic hatred and dreams of Armageddon from Brum’s most twisted sons.