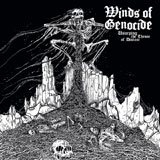 Winds Of Genocide detonated upon my consciousness for the first time with their 2010 release, The Arrival Of Apokalyptic Armageddon. Man, now that was a head smasher. The veritable Molotov cocktail of raging crust meets death metal violence that was over before you knew what had happened to you. Their debut record, Usurping The Throne Of Disease, seeks to bring that very raw, and yet so typically English crust punk devastation to the ears of the masses.

Usurping The Throne Of Disease begins this half hour of carnage with the face tearing intensity of The Howling Wolves Of Armageddon. Barreling d-beat riffing meets a crusty, Swedish death metal vibe head on, and you can feel former Dismember drummer Fred Estby’s influence right away on the mix. It has a very early 90s Stockholm feel, coupled with the kind of relentlessness found in Discharge or Napalm Death. Deathstrike Of The Scythe has a definite Napalm influence, and Kat Shevil’s vocals take Barney’s roar and adds a vile rasp.

This is music for the end of the world. This is the soundtrack to when the fire rains from the sky, and everyone is screaming and going mad with fear and hate. Winds Of Genocide feel like the epitome of their name. They feel like a raging hurricane of fetid death and thrashing limbs. The band mix the punishing propulsive fury of crusty d-beat punk with the savagery of South American war metal and the chainsaw buzz of prime Swedeath. Each of the elements is captured perfectly in Into The Darkness Of Eternal Nuclear Winter. The crushing death/doom moments in the title track are a welcome change of pace, if not a change of ethos.

The artwork sums up the record pretty succinctly. A skeleton sitting on a rock formation vomiting, em, something where more skeletons lie. Monochromatic beauty, capturing the very blackened soul of this record. And the song names, oh the song names?! Millions Lie Slaughtered? Mass Graves Of The Innocent? The aforementioned Howling Wolves Of Armageddon? This was never going to be a surprise aurally, but what is invigorating is the sense of purpose and the lack of fucking about.

Winds Of Genocide have crafted a raging record here. Coming in at just over half an hour of bludgeoning, Usurping The Throne Of Disease will stand tall this year amongst future releases of malevolence and hatred. There is always something to be said for bands who set out their stall early and deliver without compromise nor consideration for the wants of others. For Usurping The Throne Of Disease is not concerned with how we feel about it. It merely exists as a warning; a ‘I told you so’ about the sound of the future decimation of mankind. 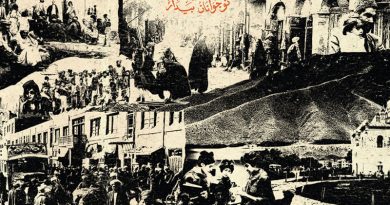