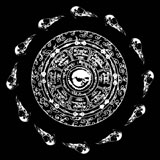 Ortega has been a rising star in the post core/ sludge/doom firmament for a while now and with this new cassette they prove to one of the best bands in the genre. Where they once may have stood on the shoulders of giants like Neurosis and Amenra, now they have become a giant themselves, standing shoulder to shoulder with their influences.

‘Crows’ is a one song tape that was especially released for their Roadburn show, but some copies might still be floating around. Now, if I say one song, don`t think that this is a short tape. ‘Crows’ is a massive eighteen minutes in length and it is a fantastic voyage through landscapes of introspection and emotion. Churning rhythms and grindingly heavy riffs are interwoven with intricate melodies and tormented vocals. The music gets its hooks in you and doesn`t let go until it is over. The feeling is like being hypnotised. The excellent production is done by JB van der Wal of Herder a.o. and it is heavier than a very heavy thing!

Gripping, exciting, intelligent and filled to the brim with feeling, Ortega`s music deserves to be recognised by everyone into sludge, doom and post core. Now we wait for that long awaited sophomore album!